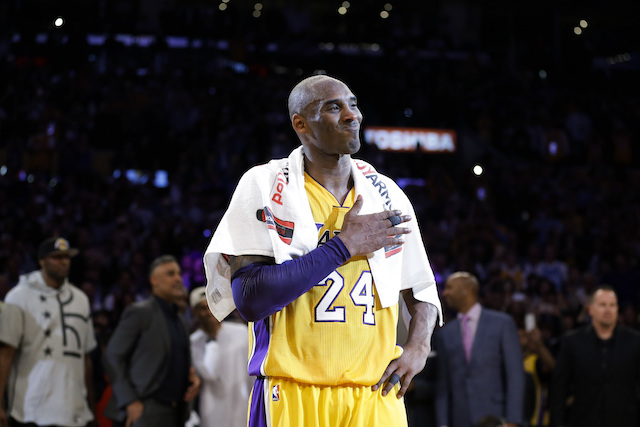 Kobe Bryant pounds his chest after the last game of his NBA career. (AP)

Remember when Kobe Bean Bryant announced he was entering the 1996 NBA draft straight out of high school? He had his shades flipped above his forehead, looking sharp in his tailored suit. Let’s be honest. He looked like a cocky teenager who feared nothing and no one.

Many thought Kobe would fall flat on his face and be humbled by the ultra-competitive world of the NBA. What those critics didn’t realize was that Kobe ended up having the last laugh.

For 20 years, the Black Mamba humbled the league.

We’re paying tribute to the Los Angeles Lakers legend, who was tragically killed in a helicopter crash on Jan. 26, 2020, by revisiting some of the greatest moments in his basketball odyssey as we celebrate his induction into the Naismith Basketball Hall of Fame in Springfield, Mass. In honor of his first number as a pro, OneManFastBreak highlighted eight of Kobe’s greatest moments.

Kobe Bryant loved coming through in the clutch. He was arguably the greatest clutch shooter in NBA history — or at least in the conversation. Back in the 2004 regular-season finale in Portland, he delivered two of the most incredible clutch shots you’ll ever see. The first one sent the game into overtime when he found enough daylight to get an off-balance 3-pointer over self-proclaimed “Kobe Stopper” Ruben Patterson. Then with one second left in the second OT, he took a pass from Gary Payton at the left wing well behind the 3-point arc, turned and fired over the long arms of Theo Ratliff, and swished it at the buzzer while falling down. The shot gave the Lakers a 105-104 win and the Pacific Division title.

Speaking of clutch, Kobe did it twice against the Phoenix Suns in the postseason. The first notable one came in Game 2 of the 2000 Western Conference semifinals. With the Lakers down 96-95 and game clock winding down, Bryant drained a midrange jumper from the left side of the free throw line over Jason Kidd with 2.6 seconds left, jogged back to the Lakers bench cupping his ear. The second dagger against the Suns came in Game 4 of the West playoffs in 2006. The Lakers ended up losing the first-round series but Kobe gave us two memorable plays in the series. He sent the game into overtime with a ridiculous circus shot under the basket. With under five seconds left in OT, he picked up the ball at midcourt after a jump ball. Took five dribbles to get to his favorite spot on the right wing and buried the game-winner over nemesis Raja Bell and Boris Diaw with no time left.

One month before Kobe’s historic 81, he exploded for 62 points in three quarters against the Dallas Mavericks. In those same three quarters the entire Mavericks team scored just 61 points. Because the Lakers blew out the Mavs, 112-90, Kobe never touched the floor in the fourth quarter. Phil Jackson asked Kobe if he wanted to go back in the game to try to increase his point total, thinking that he may not be able to duplicate the feat. Kobe’s answer: I can do it again. He was right.

The Spurs had home-court advantage entering the 2001 Western Conference finals. The Spurs had Tim Duncan and David Robinson to matchup against Shaquille O’Neal. However, they didn’t have anyone who could matchup against Kobe. Kobe put his imprint on the series right from the start, setting the tone in Game 1 by dropping 45 points on 19-of-35 shots in a Lakers road win at the Alamodome where San Antonio is nearly unbeatable. After the game, Shaq proclaimed Kobe “the best player in the league by far.” L.A. ended up sweeping the Spurs in dominating fashion, finished the postseason 15-1 and secured a second straight NBA title.

“How good is this kid?” That was the line from play-by-play announcer Bob Costas after a 21-year-old Kobe stared down Reggie Miller and dropped a cold-blooded jumper from the top of the key. As he headed toward the Lakers bench, after Shaquille O’Neal fouled out, the cameras caught Bryant pushing both hands down as if to say “I got this.” Moments later, Bryant sealed the game with a reverse put-back off a Brian Shaw miss. It was the official coming-out-party for Bryant as he led the L.A. Lakers to a crucial road victory in Game 4 of the NBA Finals against the Indiana Pacers. The main headline in the Los Angeles Times sports section read “Eight is enough.” The Lakers would eventually win the series in six games to break the franchise’s 12-year championship drought.

3. Alley-oop to Shaq vs. Blazers in 2000 conference finals

The careers of Kobe Bryant and Shaquille O’Neal are connected at the hip. Their off-the-court problems were well chronicled. But on the court, Kobe and Shaq were very much in sync. The play that defined their partnership and launched the Lakers dynasty in the 2000s was the alley-oop that capped off the epic comeback against the Portland Trail Blazers in Game 7 of the Western Conference finals. Late in the fourth with the Lakers clinging to a four-point lead with under one minute remaining, Kobe was hounded by all-time great defender Scottie Pippen in the middle of the floor. Kobe gave him a subtle wiggle going to his right, which made Pippen bite hard. Once he got Pippen to commit, Kobe crossed him over and attacked the middle of the defense. When two Blazers collapsed on him, Kobe floated a high lob toward the basket that only Shaq could reach. Shaq seemingly elevated like Superman, caught the ball with his right hand and threw it down with so much force it may have triggered a small earthquake in L.A. Fans at the brand new Staples Center erupted as they sensed something special just happened. The Kobe-to-Shaq alley-oop sent the Lakers back to the NBA Finals after a nine-year absence.

I was working in the L.A. Times newsroom when I witnessed one of the most amazing things I’ve ever since in my lifetime. Through most of the day on Jan. 22, 2006, the big news was about the NFL playoffs. When the Lakers-Raptors game finally got done, Kobe moved our NFL coverage below the fold. The box score read: Kobe Bryant, 46 field goal attempts, 28 field goals made, 7-for-13 from 3-point range, 18-for-20 from the free throw line, six rebounds, two assists, one block, three steals, and 81 points. Let me repeat that last line. Eighty-one points! He scored 81 of the Lakers’ 122 points. It was the second-most points scored in an NBA game. Only Wilt Chamberlain’s 100-point game in 1962 tops it. But Wilt was a 7-footer playing in a era with fewer big men who could keep him out of the low block. Kobe did most of his damage from the perimeter against better athletes. And besides. We don’t have footage of Wilt’s 100-point game. We have video evidence of Kobe Bryant’s 81-point game versus the Toronto Raptors at Staples Center. We all saw it.

Many of you would have guessed Kobe’s 81 points against Toronto would be No. 1 on this list. It would have been had the Black Mamba not pulled off the greatest drop-the-mic moment on April 13, 2016. Bryant wrapped up his 20 NBA seasons — all with the Lakers — with one last offensive showcase, scoring 60 points in leading a terrible Lakers squad to a 101-96 victory over the Utah Jazz. The game capsulized Kobe’s dynamic career. It was messy. It was ridiculous. It was magical.

Bryant played 42 minutes and took a career-high 50 shots. He was completely exhausted. Longtime Lakers TV analyst Stu Lantz pointed out that Kobe, at age 37, was so tired he could barely pick up his feet. His teammates kept setting him up for shots on nearly every possession. It was quite a remarkable scene if you know Bryant’s history with his teammates. For years and years, Kobe’s teammates have complained about his penchant for not passing the ball. On the final night of his Hall of Fame basketball career, every Laker on the court was encouraging him to shoot the ball. And he did. The Lakers started clawing their way back from a 10-point deficit with three minutes left in the fourth quarter as Kobe went on an 11-0 run to cut the lead to 96-95. He scored 23 points in the fourth quarter, including the game-winning pull-up midrange jumper from his favorite spot just above the free-throw line to make it 97-96. He extended the lead to three after two free throws to give him 60 points for the night. He exited the game with 4.1 seconds left to a rousing ovation, with chants of “Kobe! Kobe! Kobe!” ringing across Staples Center. “What else can I say?” Bryant asked fans after the game before ending with, “Mamba out!” A true Hollywood ending.