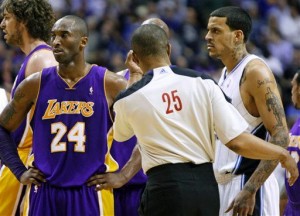 Two seasons ago, Bryant got into an altercation with Ron Artest – who was with the Houston Rockets at the time – during a playoff game. A year later, Artest signed with the Lakers and became an integral part of the Lakers’ championship run in 2010. Last week, the Lakers signed another Kobe antagonist – Matt Barnes.

Barnes, who played with the Orlando Magic last season, got into a heated battle with Bryant during a regular-season game in Orlando. There were back-and-forth intimidating glares, some words were exchanged and Bryant even shot an elbow at Barnes’ chest as he finished off a dunk. Barnes retaliated by showing the ball right in Bryant’s face on an out-of-bounds play. The two went face-to-face on more than one occasion, and the officials and teammates had to separate them.

Barnes downplayed the whole incident and claimed the encounter was a bit overblown.

“What we went through during the regular season was [something] the media built up,” the seven-year pro said on ESPN’s First Take on Wednesday. “That was just two competitors trying their best not to let their team lose.

“When you’re in the heat of battle sometimes it gets tough down there,” Barnes added. “Either of us wasn’t going to back down, and that’s really what all that was. There was a lot of talking back and forth, there were a few cuss words said.”

It was Barnes who reached out to Bryant this offseason when the opportunity to join the Lakers presented itself. Barnes was close to signing with the Toronto Raptors, but when the deal fell through the Lakers became a viable option for the former UCLA standout and Santa Clara native.

“Once I started thinking about the Lakers that’s where my heart kind of went. It was between them and Miami as my two main choices,” said Barnes, who signed a two-year deal worth about $4 million. “Being from California and going to UCLA, I just thought it would be a great opportunity and a dream come true to play for the Lakers.”

Barnes added: “The Lakers have always been on my radar. Talking to [Lakers GM] Mitch Kupchak, he said he felt the same way.”

Barnes said he grew up idolizing the Magic Johnson, James Worthy, Kareem Abdul-Jabbar and the Showtime Lakers during the 1980s. He joins a Lakers squad that has won the last two NBA titles. He’ll play backup shooting guard or small forward. The feisty defender and a decent outside shooter should be a welcomed addition to an already talented Lakers roster. The Lakers are Barnes’ eighth NBA team.