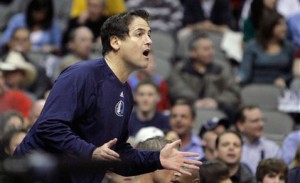 Mark Cuban is under fire for his comments directed at Kenyon Martin's mother after Game 3.

Despondent. Inconsolable. Livid. All three describe the state of the Dallas Mavericks. But instead of pointing out their obvious flaws, they’re pointing fingers at whomever they come across – whether it’s NBA referee Mark Wunderlich or Denver Nuggets forward Kenyon Martin and his mother.

After the 106-105 home loss in Game 3 to the Nuggets – when an apparent foul was not called in the final seconds that enabled Carmelo Anthony to hit the game-winning 3-pointer – several members of the Mavericks, including owner Mark Cuban, were irate and let their emotions get the best of them. A very angry Cuban was seen shoving cameras and shouting profanities toward the officials. But Cuban did not stop there. With some Dallas fans yelling that the Nuggets were “thugs,” Cuban said to Martin’s mother, Lydia Moore, “That includes your son.”

All the hostility between the Mavs and Nuggets has been simmering since Martin shoved Mavericks forward Dirk Nowitzki to the floor in Game 1. It came to a boiling point when Wunderlich and his crew missed a reaching foul on Dallas forward Antoine Wright during the waning moments of Game 3. With six seconds left and Dallas ahead 105-103, the Mavericks decided to intentionally foul Anthony to save their season. But something went very wrong in Dallas’ grand scheme.

After Martin inbounded the ball to Anthony near the 3-point, the Nuggets’ forward fumbled the pass, which ate up a few more seconds and Wright had to hold his ground because Melo was not in a scoring position. Once Melo regained possession, he drove to his right and that’s when Wright tried to reach for the ball, hoping for a whistle. However, Wunderlich and his crew decided to let the play go on and Melo was able to gather himself, rise up behind the 3-point line and drain the shot that mostly likely killed the Mavs’ season.

The NBA office said the officials missed the call, which made Cuban and the Mavs even more annoyed.

The fact of the matter is, the Mavs are upset because they realize they are fighting a losing battle. The Nuggets are the better team, and the Mavs have too many holes to plug. Center Erick Dampier is getting worked by counterpart Nene Hilario, Anthony is bullying his way in and around the paint, and Denver’s bench mob led by Chris “Birdman” Andersen, Anthony Carter and J.R. Smith is outplaying Dallas’ bench. The Mavs just don’t have the personnel to match up with the Nuggets. Josh Howard is clearly not healthy, which puts way too much on the shoulders of Nowitzki and Jason Terry.

And Cuban and the Mavericks can cry all they want about not getting the call late in the game, but the game was not lost on that noncall. It was lost when Dallas played prevent defense and played not to lose instead of playing to win. Sure, there was clear intent on Wright’s part to foul Anthony, but the execution was very poor. Wright needed to grab Anthony with both arms and make sure he was not going to get a shot off. If you have a foul to give, which the Mavs did in that situation, Wright should have committed it when Anthony was still driving to the basket.

Before the Mavs scream bloody murder on ONE play, they should look at the whole picture. Complaining and crying about NBA officiating is a sign of a loser’s mentality and a team with several insecurities. Dallas’ current roster is just not good enough to get out of the second round.