A message for Shaquille O’Neal:

It’s been an incredible 18-year ride, Big Diesel. Thanks for the ferocious dunks. Thanks for the MVPs and the championships. And thanks for the great one-liners. You’ve been a huge force in the NBA for nearly two decades, a true dominant center the league may never see again. But, unfortunately, the end is nearing and it’ s time to hang up the sneakers for good. Your skills have diminished and, at times, you’ve been embarrassingly bad. It happens to all of us. One day you’ve got the world on your fingertips and the next you’re sitting at home in your lazy chair watching CNN World News Tonight. Based on your career low in points (11.2), rebounds (6.6) and field goal percentage (52.6), you just don’t have it any more. 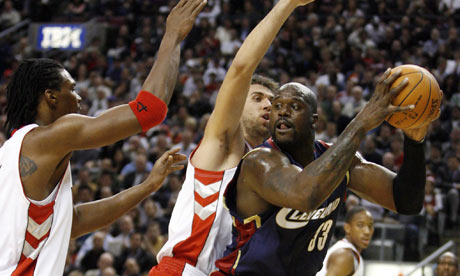 Shaquille O'Neals 18th season in the NBA could very well be his last. The Diesel is averaging career lows in points, rebounds and field goal percentage.

If anyone just watched this one Cavs game, and plenty of people in Houston did including some that know a lot about basketball, you could come to the conclusion that Shaquille O’Neal’s time is over. In truth, he looked terrible in this loss. It was the first time this season he looked this way. This on a day when he was playing against a 6-6 center in Chuck Hayes, a game where most thought he put the Cavs over the top.

After shooting the ball pretty well in the preseason, Shaq has not been as effective as in the regular season. A prime issue is that he just doesn’t get much lift on his shots. This is not a new problem, but Shaq has not compensated for it by adding loft to his hooks. He continues to shoot them they way he did five years ago, like a line drive. Like his free throws. But when your arm is more than 11 feet in the air, like it used to be, you have a better chance than when it is just over 10 feet in the air. The angle doesn’t work as well. But beyond that, he’s missing easy layups and he has been for several weeks now.

When you ask Shaq about this he gives a standard answer, which is he is no longer a focus of the offense and he isn’t looking to take 20 shots a night. That he wants to come in an be a complementary piece. That is what he’s been saying since day one and it is also true. But that doesn’t explain why his shooting percentage is down nearly 10 percent this season.

Shaq has been very effective for the Cavs in certain ways. He has directly helped the Cavs defend the paint, score more points in the paint, free shooters and keep opponents honest. He has shown against some big centers what his value is. It is not fair to look at this game, the second night of a back-to-back, and make a proclamation. I am sure that is what some will do. But it is fair to point out where he’s struggling right now and this game showed it.

And it’s not just the writers who think Shaq’s done. His own teammates think he’s done.

LeBron James said: “While [O’Neal] was out, things flowed because we were playing loose and we had a certain lineup going. We haven’t had enough games with him in the lineup and coach is figuring out the best lineups to play. So, it still is an adjustment period.”

Translation, according to the Cavs’ franchise player, Cleveland doesn’t need the 37-year-old future Hall-of-Famer. At least not this old, broken-down version of The Big Aristotle. The expiration date on this old, spoiled athlete says: must use by 3-30-09. The Cavs are now realizing that Shaq’s usefulness is done and it’s time to dispose their big offseason pick-up and eat his big, fat contract for a year.

“I felt pretty good, I missed a couple chippies,” said O’Neal after a loss to the Charlotte Bobcats.

“We made a lot of silly mistakes and we had multiple chances to win,” Shaq added.

It’s the same song and dance with O’Neal and his act is growing old.

Time to leave the stage and take your final bow, Shaq.