Five minutes into Michael Jordan’s Hall-of-Fame induction speech in Springfield, Mass., he said “I shocked the shit out of him” in reference to David Thompson’s reaction when the former North Carolina State star was asked to be his sponsor.

What? Did Jordan just say “shit” on national television? Wow. What a way to bust through the doors of basketball immortality. And the worst part about it, the audience thought it was hilarious. Jordan would have been better served had he just say “thanks” after tears began to flow before he spoke. But he didn’t. Though part of his speech was candid and heartfelt, a big part of it lacked humility and was very smug.

Michael Jordan, worshiped by the basketball world as the God of the Game and valedictorian of this year’s Hall-of-Fame class, showed very little class in an event that was supposed to highlight the greatness of the sport. The fact that most found his comment to be entertaining just shows the man crush we as a sports community have for Jordan, especially the local and national media.

The bro-mance between Jordan the media is worse than any reality TV show. ESPN’s Stuart Scott gushes over him. Sportswriter and PTI host Michael Wilbon worships the hardwood he walks on. And TNT/NBA TV’s Ahmad Rashad is practically Jordan’s BFF. 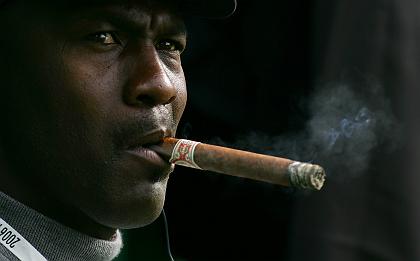 Michael Jordan smoked the competition during his 15-year NBA career, and he's not afraid to tell about it.

It just shows the incredible adulation and undying support we shower Jordan just because he’s Michael Jordan. He’s our generation’s Babe Ruth. He’s the greatest basketball player who ever lived. He’s Sho ‘Nuff, the shogun of Harlem. Bow and kiss his Nike!

It didn’t matter that Jordan had plenty of indiscretions. Because he can play above the rim, most have afforded him an above-the-law platinum card. His loyal followers  look the other way whenever his character is questioned, ignoring his gambling problem, his infidelities and his bullish ways.

He certainly displayed that lack of regard throughout his induction speech.

He made fun of Jeff Van Gundy, calling him “the little guy” on Pat Riley’s coaching staff, brushed off Magic Johnson and Isiah Thomas for the so-called “freeze out” during the 1985 All-Star Game (talk about holding a grudge), called out former Utah Jazz guard Bryon Russell, and basically threw his former GM Jerry Krause under the buss.

Basically, Jordan gave the big middle finger to the man who helped him win six NBA titles and the architect of building the Chicago Bulls Dynasty with his acquisitions of Scottie Pippen, Horace Grant, Ron Harper, Steve Kerr, Dennis Rodman, Toni Kukoc, and the hiring of coach Phil Jackson.

I guess Air Jordan didn’t mind airing his dirty laundry in front of the world, and forgot all the good things Krause did for the “organization.”

C’mon, Mike. We all know how good you are. You don’t have to rub it in our faces.

Jordan mentioned his children but wasn’t exactly poignant in his delivery. He mentioned how much tickets at the Hall of Fame Gala have gone up to $1,000, showing Jordan’s disdain for throwing money around – unless it’s on the golf course or at the casino table.

Jordan tries to portray himself as a family man but his home life is not exactly picture perfect. A colleague once told me that Jordan’s alleged extramarital relations puts Magic Johnson’s rumored sexcapades to shame. Jordan mentioned his ex-wife, Juanita, who was noticeably absent from the festivities, but failed to recognize his gal pal Yvette Prieto, who sat next to him on the front row. Somewhere out there, Karla Knafel is also fuming.

On a night that was supposed to celebrate the game of basketball, Jordan found a way to muck it up, sticking his tongue out and showing the ugly side of his personality.