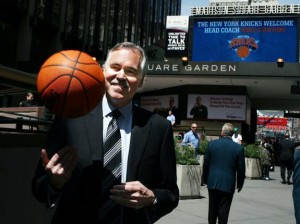 The LeBron James Sweepstakes is underway and club officials from the New Jersey Nets and New York Knicks met with James in Cleveland on Thursday to make their sales pitches to the two-time NBA MVP.

Because the Knicks don’t really have a Derrick Rose or a Dwyane Wade on their roster to dangle in front of LeBron, D’Antoni and Co. are using the “Bright Lights, Big City” approach to reel in the biggest catch of this year’s free-agent class.

“I’m confident because we’ve got a great product. New York is very unique and we’re selling the best place in the world to come and live and play,” D’Antoni said in an exclusive interview with MSG Network that was posted on MSG.com.

“It’s going to be a process where every team will go through, have face time with potential free agents, and you just have to go with your instincts,” D’Antoni explained. “There will be some jockeying going on.”

So, what if the Knicks don’t land LeBron or a top free agent this summer?

“That’s always a possibility,” said D’Antoni. “That’s why we won’t sleep a whole lot for the next week. But we set ourselves up to be able to realize this plan and here we are and let’s see if we can get it done. We’re in the ballgame and we’re trying to win.”

D’Antoni added: “We have to win. We just have to convince the guys coming here that they can win because New York is a place where you need to win. And I think we can do that. Whether they like the style or not is up to the individual. We’ll see how it goes.”

This year’s crop of free agents have been called the best in league history, and only a handful of franchises will get to reap those benefits. Those who are left behind will have some serious catching up to do in filling up their rosters after clearing cap space for that past two seasons.

“This will set a course for the franchise for the next 10 years, which is a pretty important time. And we have gone through two years of not a whole lot of fun. This is what we all signed on for and this is what we’re trying to realize,” D’Antoni said. “I’m excited about it, at the same time obviously I think everybody’s a little nervous about it that’s because it’s high stakes out there. Again, the biggest point is that we have a good hand. We’re selling a good product in New York, and that’s pretty unique.”

Would the Knicks consider this offseason a complete failure should they fall short in landing a franchise player?

“I don’t think you can really address it until November 1st when we start playing,” the Knicks coach said. “We’re going to get the best free agents available, the best team, keep developing our young guys hopefully we’ll have some surprises with them, and have a lot better product next year.”

One thing D’Antoni is encouraged about is the development of the young players on the Knicks’ roster, such as Danilo Gallinari, Toney Douglas and newly acquired Bill Walker.

“I think our core of young players can be put up against anybody,” D’Antoni boasted. “We have some pieces that are very interesting and we have a lot of room, and we’re able to find players that compliment each other, play off each other, and the best fit.”

D’Antoni said Walker and Douglas are working extremely hard this offseason, coming in daily at 8:30 in the morning to workout. “They’re very talented basketball players and have shown the dedication to what they’re doing for about three weeks and that’ll continue throughout the summer. I’m excited about both of them.”

Walker is reportedly down to 227 pounds. He was 254 last year when he was acquired from the Celtics.

“He’s very athletic guy, jumping out of the gym,” D’Antoni said of Walker. “When he did come out of high school he was one of the top two players of his class. O.J. Mayo was the other guy. He just had those knee injuries. He’s back to his athletic form when he was dominating all the Reebok camps and Nike camps.”

D’Antoni also expects center Eddy Curry to be on the team next season.