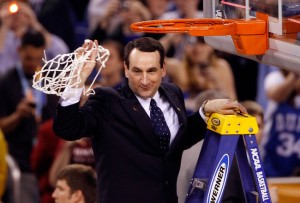 Mike Krzyzewski recently became the winningest coach in Division I men’s college basketball. He surpassed his friend and mentor, Bob Knight, who had 902 victories during his Hall-of-Fame career.

Krzyzewski notched victory No. 903 at Madison Square Garden in front of many of his former players at Duke. Spearheaded by a truckload of All-Americans during his 31 years as the King of Durham, N.C., Coach K has had some of the best teams in college basketball. He won four national championships and reached the Final Four 15 times. But which team is the best? OneManFastBreak.net examines Krzyzewski’s five greatest teams:

What started out as a good team turned into a great team by season’s end. The 2009-10 Duke team lived and rarely died by the 3-point shot. Led by forward Kyle Singler and guards Jon Scheyer and Nolan Smith, the sharp-shooting Blue Devils led the Atlantic Coast Conference in scoring margin (+16.2), free throw percentage (.761), 3-point field goal percentage (.382) and 3-point field goals made (7.4 per game). Scheyer, Singler, and Smith became the second trio in Duke history to each score at least 600 points in a season. Singler saved his best for the NCAA Tournament as he was named the most outstanding player of the Final Four in leading the ACC champions to a 61-59 victory over Butler in the championship game in Indianapolis. Duke finished the season 35-5.

The 2000-01 Blue Devils, which finished 35-4 and 13-3 in the ACC, may have been Coach K’s most talented team with six players drafted in the NBA, and five remain active in the league.  The anchor of the team was Carlos Boozer. The 6-9 chiseled forward, who currently plays for the Chicago Bulls, was one of the best low-post players in college, averaging 18 points and nearly nine rebounds per game during the 2000-01 season. Boozer was surrounded by snipers in the perimeter. Forward Mike Dunleavy Jr., the son of the former NBA great and a member of the Indiana Pacers, was a deadly 3-point shooter and can handle the ball like a guard. Jay Williams was the No. 2 overall pick in the 2002 NBA draft, but his career was cut short by a devastating knee injury suffered after a motorcycle accident. Point guard Chris Duhon (Orlando Magic) and forward Dahntay Jones (Pacers) were very strong perimeter defenders and didn’t mind doing the dirty work. The most celebrated player from the 2001 team was Shane Battier. The 6-8 forward, who now plays for the Houston Rockets, was a Krzyzewski’s favorite and the emotional leader of the Blue Devils. Battier’s No. 31 jersey is one 13 numbers hanging in the rafters at Cameron Indoor Stadium.

One of Krzyzewski’s motivational tactics is to never allow his teams to forget losses. When Duke was destroyed by UNLV in the 1990 national championship game, Krzyzewski admitted that his team was simply not on par with the Runnin’ Rebels but he made sure the core group of that Duke team (Christian Laettner, Bobby Hurley and Brian Davis) never relinquished the taste of that bitter defeat. The 30-point loss to UNLV remained in the minds of his players, and they responded by using that setback as motivation. The rematch between Duke and UNLV in the 1991 Final Four was probably Krzyzewski’s finest hour as a coach. He kept reminding his team they were better than Jerry Tarkanian’s Rebels, even though he told the media the Rebels were the superior team. Krzyzewski had been to three straight Final Fours prior to 1991, and he was undeservingly being labeled as can’t-win-the-big-one coach. He proved everyone wrong with a stunning upset of undefeated UNLV, which boasted future NBA standouts Larry Johnson and Stacey Augmon. The 1990-91 Duke squad, which finished 32-7, may not have been Krzyzewski’s most physically talented team, but it was his strongest team mentally.

Even though the 1985-86 Blue Devils team lost in the NCAA championship game to Pervis Ellison and the Louisville Cardinals they remain the school’s most important team. Why? Because Johnny Dawkins, Tommy Amaker, Jay Bilas, David Henderson, Danny Ferry, Billy King, Quin Snyder, and Mark Alarie were the foundation of Coach K’s program. Without them, there would be no Duke Dynasty. They were there during the infancy stages of the program when many doubted if Krzyzewski’s system was going to be successful. Amaker and Dawkins formed arguably the best backcourt in the ACC. Dawkins led the team in scoring (20.2 points per game) and was a consensus All-American. Alarie, Henderson and Bilas started in the frontcourt while King, Snyder and Ferry, a talented freshman, provided scoring punch off the bench. The ’92 team won a record 37 games and had just three losses.

Duke and Kentucky staged an all-time classic NCAA Tournament battle in the 1992 East Regional final at the Spectrum in Philadelphia. Down by a point with 2.1 seconds left Grant Hill throws a perfect length-of-the-court inbounds pass to Christian Laettner, who grabs the pass at the free throw line, takes one dribble and swished a fadeaway jumper at the buzzer to advance Duke to the Final Four. It is one of the most dramatic plays in the history of the tournament, and it led to Krzyzewki’s second consecutive national title. The 1992 Duke team – which won 34 games and finished 14-2 in the conference – was led by Wooden Award winner Laettner. The 6-10 forward never lacked in confidence and his swagger permeated throughout the team. Laettner was surrounded by excellent perimeter players: Bobby Hurley, Thomas Hill, Grant Hill and Brian Davis. Thomas Hill was a shooting guard who could score in the paint and Davis completed Laettner in the frontcourt with his energy and athleticism. Grant Hill, a sophomore in 1992, was the team’s Swiss army knife. He could play four of the five positions and can create his own shot. Hurley was the point guard from New Jersey who may not fit the mold of a classic basketball player but he always got the job done and ran the offense to near perfection. Krzyzewski says his ’92 team was not only his most confident team but it was also his most determined. Laettner and Co. won the NCAA title the previous season and had a huge bulls-eye on their chest. But they cleared every hurdle and became the first team since Wooden’s UCLA squad to win back-to-back championships.