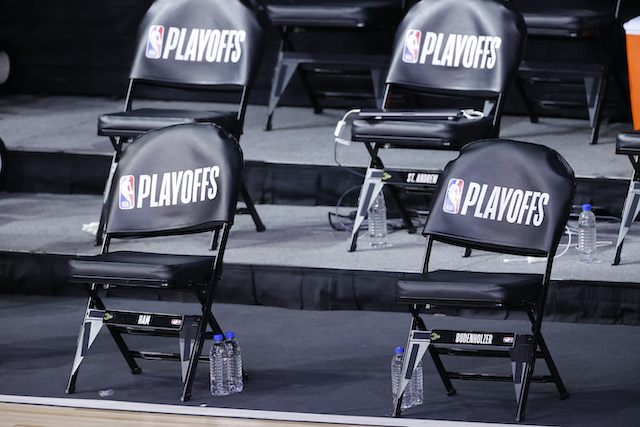 The Milwaukee Bucks staged a boycott prior to their playoff game in the bubble. (AP)

If the NBA players didn’t get people’s attention before, they have it now.

The NBA has been leading the charge in the movement to fight for social justice. Since arriving in the Disney World campus in Orlando, players and coaches have been making loud statements by kneeling, locking arms during the national anthem and wearing inspirational messages on the back of their jerseys from “Black Lives Matter” to “Say Her Name” to “Equality” to Education Reform” to I Am A Man” to “Peace” to “Freedom.” The words “Black Lives Matter” are embedded on the court.

Senseless shootings of unarmed Black men and police brutality continued. The case of Breonna Taylor remains unresolved. Then, right in the middle of the bubble playoffs, a 29-year-old Black man, Jacob Blake, was shot seven times in the back by Wisconsin police while he was with his children.

The shooting happened in the backyard of the Milwaukee Bucks. They witnessed the same Blake video that circulated on TV and online.

The Bucks were fed up. They didn’t feel like playing basketball. Their minds were in Kenosha. So, they staged a boycott.

As tipoff came before Game 5 of the Bucks-Magic first-round series, the Bucks players and coaches were nowhere to be found. They remained in their locker and refused to take the court. When word got around that the Bucks were boycotting a playoff game, the Houston Rockets and Oklahoma City Thunder, which were scheduled to play next, followed by boycotting their playoff game as well. The Los Angeles Lakers and Portland Trail Blazers soon followed with their own walkout.

Point made loud and clear. The NBA playoffs were put on pause. It was a historic moment in sports. The NBA players flexed their power by refusing to play unless demands were met. That’s how you create social change. Not with T-shirts or stickers or banners. You create change by making things uncomfortable.

There were two Bucks who spoke shortly after the games were officially postponed: George Hill and Sterling Brown.

Hill had been one of the more vocal players in terms of speaking out against continuing to play in the bubble. “We shouldn’t have came to this damn place to be honest,” Hill said days before the walkout.

The other speaker was Brown.

He wrote in the Players’ Tribune that the city of Milwaukee offered him $400,000 to “be quiet” after copes kneeled on his neck, stood on his angle and tased him in a parking lot. In raising police brutality in his essay and speaking in front of his teammates outside of the Bucks locker room in the bubble, Brown no longer wanted to be quiet.

Systemic racism is a difficult and uncomfortable subject to discuss. Props to the Bucks, Rockets, Thunder, Lakers and Blazers for making things uncomfortable.

The NBA players’ monumental decision sparked a widespread protest in other sports as multiple MLB, WNBA and MLS games were postponed and several NFL practices were canceled. The day will go down in history as pivotal point in the Black Lives Matter movement. The players have learned that their message wasn’t getting across loud enough and fast enough. By making a stand and refusing to work, it created a firestorm all across the media. It forced local, state and federal government to listen to the players’ demands.

Hours after Bucks walkout, the league announced and the NBAPA agreed on several new social justice initiatives, including converting NBA arenas into voting sites for the 2020 presidential election in November.

“In every city where the league franchise owns and controls the arena property, team governors will continue to work with local elections officials to convert the facility into a voting location for the 2020 general election to allow for a safe in-person voting option for communities vulnerable to COVID,” the NBA’s statement read. “If a deadline has passed, team governors will work with local elections officials to find another election-related use for the facility, including but not limited to voter registration and ballot receiving boards.”

There are still more work to do, but it’s a step toward progress.