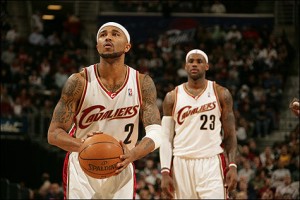 Mo Williams' 17 points was not good enough to back up LeBron James' game-high 49 points in Game 1 of the Eastern Conference finals. (GETTY IMAGES)

If Mo Williams wants to be Robin to LeBron James’ Batman, he needs to play a lot better and be more of a factor in the Eastern Conference finals.

Williams, Cleveland’s much-celebrated offseason acquisition and a first-time All-Star this season, made just 6 of 19 shots from the field and was 2 for 8 from 3-point range in Cleveland’s 107-106 loss to Orlando in Game 1 at the Q. His 17 points may have been good enough for a regular-season victory, but these are the conference finals – a place Williams has never been in. He admitted before the game that he missed his pre-game nap because he was so anxious to play.

It almost seemed like James was playing one-on-five against the Magic for most of the game as the rest of the Cavaliers showed up late to the dance. James scored a career-playoff high 49 points, making 20 of 30 shots. The rest of team made 23 of 58 shots.

James hinted that he may have shot his team out of rhythm in Game 1, but Williams knew better and immediately squashed any criticism headed in James’ way for taking too many shots.

“Offensively, we were stagnant at times. Maybe because I felt the hot hand. I got back to the one-on-one play I had in the past,” James said. Before another reporter could ask the next question, Williams said, “I want to add to that last (statement). I don’t think him (LeBron) going one-one-one was the factor. I think he had it going and that’s part of our offense; him to attack his man. The biggest key to the game was myself. I have to take pressure off (LeBron).”
“I’m looking at the stats, and I’m looking at Dwight (Howard) and I’m looking at Rashard (Lewis) and I’m looking at Hedo (Turkoglu), and those three guys were terrific,” Williams said about Orlando’s big three. “And I look at myself … 6 for 19, Bron is 20 for 30 from the field. He can go one-on-one all he wants but I got 19 shots still. It wasn’t him.”

Howard scored 30 points and had 13 rebounds, Lewis scored 22 points – including the game-winning 3-pointer – and Turkoglu had 15 points and 14 assists.

Williams had a chance to atone for his poor Game 1 performance when James whipped a pass his way with under 10 seconds left and the Cavs down by one. Instead of pump-faking his defender and taking one dribble to step into a potential game-winning jump shot, he swung a pass to Delonte West in the corner for a 3-pointer, which he missed.

At the end of the day, James was bleeding and cramping after playing 41 hard minutes. Williams knows he needs to step his game up if the Cavaliers are going to advance to the NBA Finals. He knows full well that Batman cannot do it alone. Every once in a while, Robin needs to take the steering wheel of the Batmobile and drive Batman out of harms way.