Like two prize fighters who just went toe-to-toe for four brutal rounds, Manu Ginobili and Steve Nash shook hands at midcourt and congratulated each other.

Ginobili and his broken nose then left the court and headed for the offseason because his San Antonio Spurs were knocked out of the 2010 playoffs by the Phoenix Suns, led by Nash and his one good eye.

Nash had six stitches above the right eye after getting caught with an inadvertent Tim Duncan elbow in the second half, but the Suns’ leader returned to the court and scored 10 of his 20 points in the fourth quarter, including a running one-hander in the paint to put the Suns ahead, 103-97, with 29.9 seconds left.

“I couldn’t be happier for a class, class, class guy. I hate him, but he’s classy,” Spurs coach Gregg Popovich said of Nash, who admitted he could barely see with his bandaged right eye. 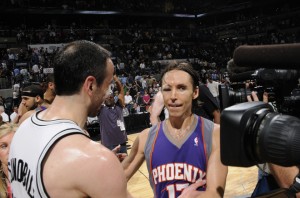 “I can’t really see out of it,” Nash said. “I don’t want to glorify it, but it’s been a long time since we beat this team and advanced in the playoffs, and I tried to do what I could to close it out.”

The Spurs have tormented the Suns in their past five playoff appearances, eliminating Phoenix four times. But the Suns made sure this year was different, beating San Antonio at its own game with solid defense and an efficient halfcourt offense that is normally a staple of the Spurs.

“They just hit a lot of big shots,” said Ginobili, who had 15 points but was just 2-for-11 from the field thanks to excellent defense from Grant Hill. Ginobili said the nose injury didn’t bother him in the series, but it was obvious his aggressive and his forays to the basket decreased since he got hit by Dirk Nowitzki in the first round.

“I just think where Steve [Nash] has taken us and what he’s been able to get done, it started in training camp. He was just determined that ‘we’re gonna get back to where we were and I’m gonna see that.’ ”

Like a one-eye jack in those classic pirate movies, Nash spearheaded a poised Phoenix team down the stretch. And he didn’t need to see Amare Stoudemire on those pick-and-rolls because the two All-Stars know each other so well they could probably run their pick-and-roll sets with their eyes closed. In Nash’s case, he really had to do it with his eyes closed because his right eye was so swollen he needed a cutman on the bench.

“I can’t really see out of it,” Nash said. “I don’t know how it didn’t keep me on the sidelines. I wanted to give it a try, and luckily it worked out.”

“They just outplayed us,” said a dejected Tim Duncan, who got outscored by Stoudemire, 29-17, in Game 4.

The Suns’ four-game sweep clearly signaled that the Spurs’ three-time championship trio of Duncan, Ginobili and Tony Parker can no longer carry the load. Duncan is 34 years old and has a ton of mileage on his legs. Ginobili, 33, recently signed an extension that should keep him a Spur for the rest of his NBA career, but he has been injury prone and the same goes for Parker.

The Richard Jefferson experiment didn’t work out for San Antonio, so Popovich must find another scorer (or two) to help his big three.