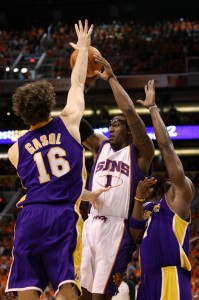 The Lakers held Amare Stoudemire to 7-for-20 shooting in Game 6. (NBAE/GETTY IMAGES)

In what may have been his final game in a Phoenix Suns uniform, Amare Stoudemire walked off the court disappointed.

Although Stoudemire scored a team-high 27 points in Game 6 of the Western Conference finals, the Suns’ All-Star center didn’t have the type of game worthy of a maximum contract this summer. He struggled from the field (7 for 20), grabbed just four rebounds and, more importantly, his team lost in six games and is now out of the 2010 NBA playoffs.

Stoudemire can opt out of his contract on July 1 and become an unrestricted free agent. He is among an elite class of potential free agents – LeBron James, Dwyane Wade, Joe Johnson and Chris Bosh heading the list – who could change the landscape of the league.

But Suns All-Star point guard Steve Nash, Stoudemire’s teammate in Phoenix for the past six seasons, told reporters on Saturday night just minutes after Phoenix was eliminated by the L.A. Lakers in Game 6 that he prefers the Suns to stay intact, and that includes re-signing Stoudemire.

“I feel a great source of pride for me to be able to play with these guys, ” said Nash, who scored 21 points and had nine assists in a losing effort. “They’re such great people, great teammates that have committed absolutely to what we’re trying to do. We’re a good team. We had a real legitimate chance to beat the Lakers and get to The Finals and play for a championship. 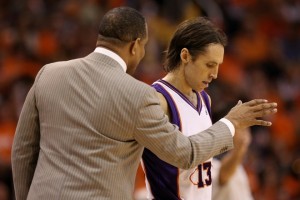 During his postgame news conference following the loss to the Lakers, Nash also endorsed Alvin Gentry as the right coach to lead the Suns to a championship.

Nash may be the face of the franchise and the two-time league MVP, but it’s Stoudemire’s presence in the middle and his ability to finish at the rim off pick-and-rolls are what separates the Suns from becoming the Golden State Warriors. Stoudemire and Nash form the NBA’s best pick-and-roll combo in the league, and it would be difficult for Phoenix to find a suitable replacement.

Stoudemire has repeated all throughout the playoffs that there’s a 50-50 chance he’ll be back in Phoenix, the only franchise he has played for in his eight-year NBA career. He upgraded it to a “good possibility” that he’ll return to the Suns after the Game 6 loss, but it may depend on how much the Suns are willing to pay him and for how long.

“There are so many ways to structure a deal and what have you, but it’s very important to have a sense of security,” Stoudemire told The Arizona Republic.

Stoudemire has one year left on his current deal that pays him $17.68 million. He admitted that all the trade rumors the past two years have really bothered him and could ultimately be the reason why he leaves. But Stoudemire also said that his relationship with Suns management greatly improved after he was not dealt last February.

Expect Stoudemire to test the free-agent market this summer as he waits for the Suns to make him an offer he can’t refuse. In the end, Suns owner Robert Sarver may have to overpay his already overpaid superstar in order for the Suns to keep their title hopes alive.