We all know perennial NBA powers Lakers, Celtics, Cavaliers and Spurs will be playing deep into May, and even maybe through June. Each team has been there before and it would take a major injury to derail their title chances (see Manu Ginobili and Spurs).

But what about those teams that enjoyed playoff success last season after some no-so-good years. A look at which teams are title contenders which ones are one-hit wonders.

Orlando Magic
A trip to the NBA Finals usually merits a clear-cut “title contender” label but there are a lot of questions that need to answered heading into this season for the Magic. First, can Vince Carter replace Hedo Turkoglu as the team’s go-to guy in the clutch? Is Jameer Nelson completely recovered from his shoulder injury and ready to reclaim his All-Star status? Can Dwight Howard get better after leaping into first-team All-NBA status last year? I say, NO, YES, YES. I guess two out of three ain’t bad. Orlando Magic: CONTENDER.

Houston Rockets
Losing Yao Ming for the season hurts and head coach Rick Adelman will need to scrap his post-up offense in favor of a more wide-open style. Chuck Hayes and Carl Landry have to step into the vacuum left by Yao and Luis Scola must become the team’s No. 1 option on the block. Here’s an addition by subraction: Trevor Ariza for Ron Artest. At this stage of his career, Artest is a shell of himself and Ariza has more upside. It will be feast or famine on offense as the focus shifts entirely on Aaron Brooks. If the young point guard can somehow bottle up his seven-game playoff performance against the Lakers and unleash it for an entire season, the Rockets will be a factor. Speaking of IF, Tracy McGrady won’t be able to rejoin the team until November. Even if T-Mac returns to the court, it remains to be seen how much he can contribute. And can his surgically repaired knee hold up for an entire season? Anything out of T-Mac will be a big plus for the Rockets, but will it be enough? Houston Rockets: ONE-HIT WONDER.

Denver Nuggets
The Nuggets won 54 games last season and reached the Western Conference finals before losing to eventual world champion L.A. Chauncey Billups gets a full training camp the time around and his presence alone can help Denver smooth out all the small problems the Nuggets have had in years past. J.R. Smith, who will miss the first seven games of the season because of suspension, is the key. If he can shave the “hot dog” off his game, he makes the Nuggets a championship-caliber team. Nene’s health is also another factor, but he seems to be fully recovered from all his ailments. and adding Arron Afflalo helps the Nuggets on the defensive end. Afflalo is bigger, stronger, quicker and a better offensive player than Dahntay Jones. Denver Nuggets: CONTENDER. 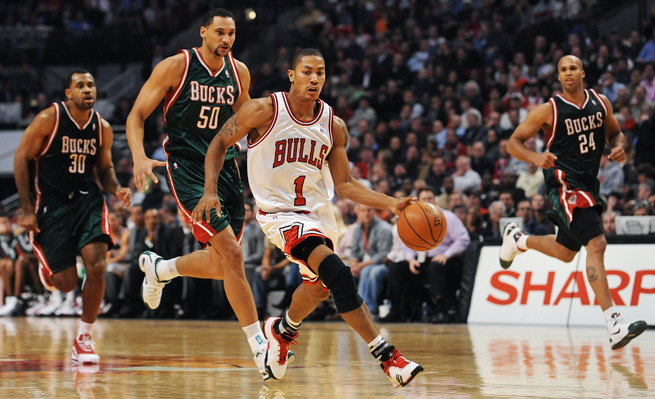 Derrick Rose was a catalyst in the Bulls' seven-game classic against Boston. (CHICAGO SUN-TIMES)

Chicago Bulls
The epic seven-game war with the Celtics put the Bulls back in the limelight, but to think that Chicago is back as a contender is wishful thinking. Last year’s Rookie of the Year Derrick Rose will get better but he’s the only player on the current roster than has room to improve. Everyone else is tapped out. The loss of Ben Gordon is huge. BG was the guy who made the big shots vs. the Celtics and I don’t think the often-injured Luol Deng can cover for his loss. There’s a saying that you don’t appreciate someone until they are gone. Well, Ben Gordon has left Chicago to be the new microwave in Detroit. Chicago Bulls: ONE-HIT WONDER.

Portland Trail Blazers
The young Blazers grew leaps and bounds a season ago and are primed for bigger and better things this season. Brandon Roy is a star and LaMarcus Aldridge is getting there. The addition of point guard Andre Miller will help take some of the ball-handling duties from Roy, and will push Steve Blake to the bench where he can be more effective. The key is Greg Oden. If he can give Portland a solid 70 games, Portland could challenge Denver for the top spot in the Northwest Division. Portland Trail Blazers: CONTENDER.

Miami Heat
Dwyane Wade can’t possibly carry this team by himself. He needs help and I don’t think Pat Riley did enough to give D-Wade support during the offseason. Center Jermaine O’Neal can’t stay healthy and forward Michael Beasley is still trying to get his life in order. Miami made the playoffs last year but could struggle to get back this season. Miami Heat: ONE-HIT WONDER.