Kendrick Perkins is the anchor of the Boston Celtics and without him the Celtics sunk like the Titanic.

Seven minutes into Game 6 of the 2010 NBA Finals, the Celtics lost their starting center when he came down awkwardly on his right knee while trying to grab an offensive rebound away from Kobe Bryant and Andrew Bynum. Perkins fell to the floor and immediately pointed his right knee and called for the Boston medical staff.

He was helped off the court and taken to the locker room, and did not return. The initial report is that he tore two ligaments on his knee and is out for Game 7. He was seen leaving the arena on his own power, but definitely was favoring the knee.

Celtics coach Doc Rivers said not having the 6-10, 280-pound Perkins puts the Celtics are at a huge disadvantage against the bigger and taller Lakers. “He’s one of our guys that gives us great spirit. He gives us a lot of toughness and gives us size. I hope he can play. It’ll be tough if he can’t. Somebody else is going to have to step forward. He cleans the paint up. Not having him there made the Lakers awfully long.” 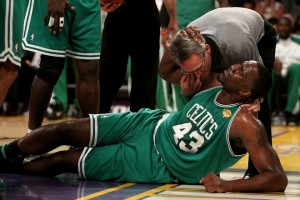 Kendrick Perkins lays on the floor after injuring his right knee in the first quarter of Game 6. (NBAE/GETTY IMAGES)

Without Perkins manning the middle and cleaning up Boston’s bricks, the Celtics were manhandled, 52-39, on the boards and the Lakers dominated the game, 89-67, Tuesday night.

You could sense that as soon as Perkins left the game, the Celtics were not the same team. In fact, seeing Perkins getting helped off the court really killed Boston’s spirit.

“I think we were a little focused on when Perk was going to come back instead of continuing to play. As soon as halftime came we all ran to the training room to see if he was OK. Our energy went down for a little bit, but for the most part it’s not an excuse. We just didn’t have it,” said Celtics point guard Rajon Rondo, who suffered a gash on his chin after running into Ron Artest’s elbow in the second half.

“Perk is our enforcer. He’s the biggest body we have on Bynum. He cleans the paint up for us. He does a lot of the intangibles. He’s a great shot-blocker, rebounder and he’s the anchor of our defense.”

Former Celtic Kevin McHale, who was at Game 6 covering the game for NBATV, said Perkins is one of the toughest players in the league and for him to sit this one out shows the seriousness of the injury. “Kendrick’s got a fairly severe knee injury and when you do something like that the swelling would be hard for them to eliminate. Believe me, when you have an injury like that, you go to bed thinking ‘You know Coach, I don’t feel that bad.’ Then you wake up the next morning and you put that first step in and it’s like someone hit you with a sledge hammer.”

The Celtics say they are still confident they can win the series even without their best post defender, but realistically their NBA title hopes may have disappeared when Perkins’ knee gave out.

But one thing is for sure, they’re not going to use Perkins’ injury as an excuse.

“Perk brings rebounding and defense to the game, and his toughness so you lose that. But that’s not an excuse,” said Celtics captain Paul Pierce. “We’re a mentally tough team. We’ve had injuries all year, and we know how to win when guys go down.”