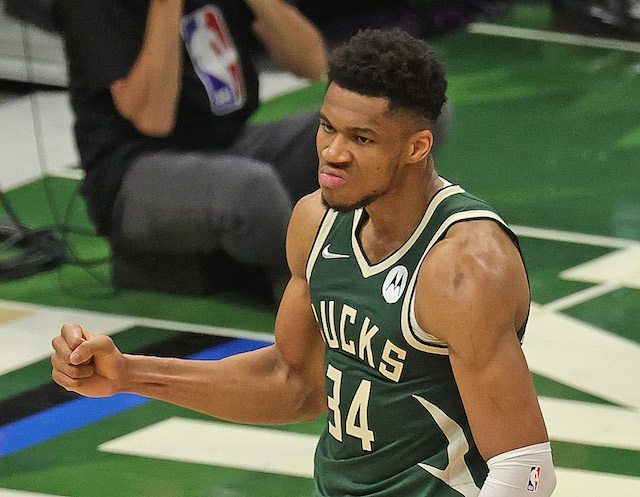 Giannis Antetokounmpo had a refreshing perspective when it came to playing in the NBA Finals. Giannis wasn’t born in the United States. He was born in Greece to Nigerian parents. He wasn’t a five-star recruit. He wasn’t exposed to the AAU circuit. He wasn’t a high draft pick.

His journey to the NBA was different than most athletes. Once he became an All-Star player and a two-time NBA MVP, the last level before scaling his Mount Olympus was winning a championship. He could have easily joined a super team to win a title, just like LeBron James did when he left Cleveland for Miami and just like Kevin Durant did when he left Oklahoma City for Golden State. Instead, Giannis chose to stay in small-market Milwaukee.

“Obviously I wanted to get the job done. But that’s my stubborn side. It’s easy to go somewhere and go win a championship with somebody else. It’s easy,” Giannis continued. “I could go to a superteam, and just do my part to win a championship. But this is the hard way to do it, and we did it. We f—ing did it.”

Antetokounmpo is built differently, literally and figuratively. The 6-11, 242-pound Greek Freak has been creating his own path since he started playing basketball at the age of 12. His story would make an interesting TV documentary. He stays humble because of his past life. Growing up in Greece, he sold watches, DVDs and CDs to help his family survive and make money after his parents came there as immigrants from Nigeria. Money was tight in their household, so Giannis shared basketball shoes with his older brother Thanasis. He wore Thanasis’ Kobe 4s when he played in a small gym in Athens.

Antetokounmpo was discovered playing in a small, worn-out gym in Athens. He began his pro basketball career for the youth teams of Filathlitikos in Athens. He moved up to the club’s senior team prior to the 2013 NBA draft. He didn’t know where Milwaukee was when the Bucks made him the 15th overall selection.

“Eight years ago, eight and a half years ago, when I came to the league, I didn’t know where my next meal will come from. My mom was selling stuff in the street. Now I’m here sitting at the top of the top. I’m extremely blessed. I’m extremely blessed,” Giannis told reporters while holding the Bill Russell NBA Finals MVP trophy and the Larry O’Brien trophy.

“If I never have a chance to sit on this table ever again, I’m fine with it. I’m fine with it,” he said. “I hope this can give everybody around the world hope. I want them to believe in their dreams.”

“He appreciates all the little things, coming to the practice facility and getting in extra shots. He appreciates just everything,” Budenholzer said of his superstar. “When you’re around people [who appreciate life], their spirit fills you up. Just to listen to him, that’s a man who appreciates life. Appreciates everything that’s been put in front of him, attacks it, and makes everything great. I love being around him.”

When ESPN personality Rachel Nichols asked Giannis about his Finals experience, he used the word “enjoy” nearly a dozen times. “I feel like I’ve come a long way. Just to be able to sit here. Being interviewed by you guys, playing in this game, being with my teammates. It’s been a long journey. I’m trying to enjoy every single moment.”

Giannis even had a hilarious response when longtime NBA reporter Marc J. Spears asked him if it bothers him when opposing fans troll him for his very deliberate routine at the free throw line.

Giannis talks about fans counting while he’s at the free throw line. pic.twitter.com/qB4BhZf9eM

“I think it’s something that’s going to follow me for the rest of my career,” he said with a grin. “I just have to embrace it and have fun with it. But at the end of the line, I’m just focused on my routine, my technique, my body, and that’s it. Like I said, it’s not going to stop. I just have to learn to live with it.”

Spears followed up by asking Giannis if he hears the fans counting. “Of course I notice. Twenty thousand people yelling 1, 2, 3, 4,” he said while laughing.

Playing the game of basketball is fun. And Giannis prefers it that way. It allows him to play with freedom and passion. At times, he plays so much instinctively that basketball pundits nitpick his game like politicians grilling witnesses on Capitol Hill.

But if there’s one thing Giannis cannot be criticized for is his effort. He doesn’t cheat the game. He’ll play until he has emptied his tank. He plays with so much energy and effort that at the end of the day he’s able to live with the result.

It is this very same approach that allowed Giannis to deliver the defining moment of his basketball career in Game 4 of the 2021 NBA Finals in Milwaukee against the Phoenix Suns. TV analyst Jeff Van Gundy called it one of the greatest plays you’ll ever see. Bucks forward Pat Connaughton called it the best block of all time. Another teammate, Khris Middleton, referred to it as an “Oh shit!” moment.

For Giannis, it was simply a great hustle play.

Giannis’ block of Ayton’s potential dunk came with 1:14 left in the fourth quarter with the Bucks ahead 101-99. Instead of the game being tied, the play ignited a Milwaukee run that put the game away.

“I thought I was gonna get dunked on, to be honest with you,” Antetokounmpo admitted. “You risk it. You kind of feel it. I felt him rolling to the rim behind me, so I knew the only chance to get a stop is just jump toward the rim and try to cover that angle for him to score.”

He continued: “I saw the play coming. I saw that [Devin Booker] was going to throw the lob and I was just going to jump vertical toward the rim. Hopefully I can be there in time, and I was there in time and was able to get a good block and go down and get two points.”

Antetokounmpo said the play didn’t catch him by surprise. He saw the play develop and used his remarkable instincts to thwart it.

“Once I saw [Booker] put the ball on one hand, he was too far for a layup. So I knew he was trying to lob it,” Antetokounmpo said. “I committed so much, I felt [Ayton] roll to the rim behind me. So I knew the only change to get a stop is to jump towards the rim and try to cover the angle and [prevent] him to score. I didn’t jump to block the ball. I jumped towards the rim. That’s what kinda helped me, put me in position to get the block.”

Reaction around the basketball community was swift. The best one may have come from former NBA player and current NBA TV analyst Greg Anthony.

He tweeted: “When you factor in everything Giannis had to do on this play! May be the single best defensive play I have ever seen!!!”

Whether it’ll be viewed as the greatest block of all time is up for debate. What can’t be debated is the fact that it’s the signature moment of Giannis’ career. What also can’t be debated is Giannis’ place in history. He will go down in history as one of the greats. He’s an MVP and he’s a champion. He did it the hard way and we could all learn from that.

“I know I’m a role model. But this should make every person, every kid, anybody around the world believe in their dreams,” Antetokounmpo said. “No matter whatever you feel when you’re down, when you don’t think it’s going to happen for you or you might not make it in your career — might be basketball, might be anything — just believe in what you’re doing and keep working.

“Don’t let nobody tell you what you can be and what you cannot do. Just believe, man. I hope I give people around the world, from Africa, from Europe, hope that it can be done. It can be done.”