The L.A. Lakers are a proud basketball team that doesn’t easily back down from challenge – at least the leaders of the team don’t.

So, after losing two of three in Boston, Lakers head coach Phil Jackson and team co-captain Kobe Bryant were in very salty moods. And who can blame them? For the first time in the 2010 NBA postseason, the Lakers trail a best-of-seven series 3-2 and are on the brink of elimination. Bryant and Jackson have had to answer a boatload of questions regarding the team’s shortcomings, but in reality, the Celtics should be given credit for holding serve and now it’s the Lakers’ turn to do the same.

“If you look at it they’ve come home and carried the 3-2 lead back and it’s basically homecourt, homecourt. Now we’re going back to [our] homecourt, and that’s the way it’s supposed to be,” Jackson explained.

When Jackson was asked about the leaky Lakers defense, the Lakers coach pretty much dismissed it and thought L.A. defended well enough to win Game 5.

“If I’m not mistaken they scored 92 points, am I right? We’ll live with that and come back and play that game again, regardless of what they shot,” Jackson said. “They had their run, we know they’re gonna have their run and as I told the players before the game this team is going to shoot well one of these games. They haven’t shot well, yet, on their homecourt so they’re gonna have a game when they shoot well and you’re just going to have hang with them.”

Boston’s defense has gotten much of the credit for putting the Celtics ahead in this series, and Bryant believes the team dominates the hustle board and plays with more efficiency on offense has come out on top. 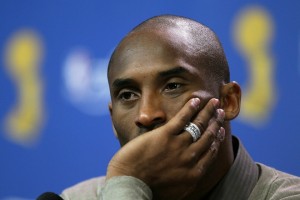 Kobe Bryant says the Lakers have a challenge ahead of them down 3-2 in the NBA Finals. (NBAE/GETTY IMAGES)

“They got all the hustle points, got all the loose balls and offensive rebounds down the stretch,” Bryant said. “They just got to every ball. They played with more tenacity than we did, and we have to do a much better job in Game 6.”

Bryant continued: “They do a good job defensively. We normally do a good job moving the ball. We missed a lot of shots. We shot 37 percent, but that’s a testament to their defense as well. To be honest with you, the offensive part of the game kinda comes and goes. I just felt like defensively we weren’t very good at all. We didn’t get any stops. They shot layup, after layup, after layup. Can’t survive when a team shoots 57 percent.”

So, how confident is Bryant that his Lakers can win these next two games at home to win the NBA title?

“Nah, I’m not very confident at all,” Bryant joked, then broke into a wide grin to accentuate his sarcasm.

“We have a challenge, obviously, down 3-2. It is what it is,” Bryant said. “You go home, you got two games at home that you need to win. Pull your boots up and get to work.”