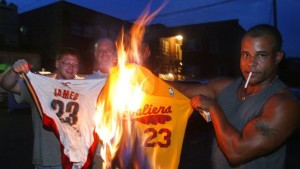 What is the best and most interesting matchup of the 2010-11 NBA season?

The opening-night matchup between the Miami Heat and their Three Kings against the Boston Celtics’ Big Four is nice, but it lacks drama. The Christmas Day showdown between the Heat and defending NBA champion Lakers in Los Angeles has plenty star power on and off the court, but the subdued and spoiled fans at Staples Center probably won’t be throwing their mocha lattes and cappuccinos at the opposition during the holiday season.

The best regular-season matchup for the 2010-11 season is….drum roll, please…..the Dec. 2 contest between the Heat and Cavaliers in Cleveland, also known as The Return of LeBron.

When LeBron James announced on nationally TV that he’ll be “taking his talents to South Beach,” seething Cavaliers fans began spitting venom and started breathing fire. They were burning No. 23 jerseys and tearing down LBJ posters just minutes after The Decision. The anger was comparable to the day Clevelanders eliminated “Art” and “Modell” from their vocabulary.

Even Cavs owner Dan Gilbert lost his cool, calling LeBron’s decision “cowardly” and slapped The Curse of White Man from Town on the two-time league MVP.

“The fanbase is still in shock,” Cleveland Plain Dealer writer Brian Windhorst said on NBATV’s Game Time. “Everything that happens to the Cavaliers for the foreseeable future is going to be attached to after LeBron.”

When LeBron walks back into Quicken Loans Arena on Thursday night, it would be like walking into a vampire’s lair with blood dripping from his arms and a piece of meat hanging from his shoulders. Cavaliers fans will have their fangs out, all dying to take a bite out of their former hometown hero.

TNT will televise the game and the hype will be absolutely bananas. It will be like Terrell Owens returning to Philly….times 10! The boos Pat Riley heard the night he returned to Madison Square Garden as the head coach of the Heat are nothing compared to the boos LeBron will hear on Dec. 2.

LeBron better have added security that day because Cavs fans will be out in full force ready to eat him alive.