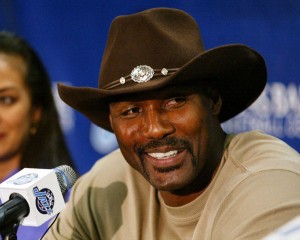 Karl Malone announced his retirement from the NBA on Feb. 13, 2005 in Salt Lake City, a place he called home for 18 seasons. (REUTERS)

When the 1992 Dream Team took time off to visit golf courses in Barcelona, almost everyone on the team was itching to bust out their golf clubs out and take their cuts. Karl Malone saw the well-manicured greens, uninviting bunkers and deep roughs, and called it a “waste of pasture.”

Karl Malone was a different breed of athlete. For one, he’s a stand-up guy whose loyalty is admirable. He prefers Harleys over Ducatis; monster trucks over Escalades; 18-wheelers over Rolls Royces. “Growing up, I was always fascinated by equipment,” he said.

He also enjoys riding horses and, when he’s not sporting a baseball cap, he dons a cowboy hat. He wears T-shirts and jeans to work, and probably doesn’t own a tuxedo. The last time he got dressed up for an occasion was at the 1985 NBA Draft in New York. Remember that fashion debacle? After David Stern called Malone’s name with the 13th overall selection, the Louisiana Tech stud walked to the stage wearing white pants, white shirt, a blue coat and tie that looked like it was purchased at Toys R Us.

Somewhere on the red carpet, Joan and Melissa Rivers are having a heart attack after seeing Malone’s fashion faux pas. He just looked real uncomfortable and probably couldn’t wait to rip that tie off his neck, cut off his sleeves and pop a cold one in the green room. You know it crossed his mind.

Malone may have been a pro basketball player, but he’s more of a Big Country than City Slicker. He loves the great outdoors. He owns a cabin in Kenai, Alaska, where he goes fishing and hunting with family and friends. “I just like to kick back and just enjoy life,” Malone said. “We grew up hunting and fishing in Louisiana. When I come here [Alaska], it’s not just about fishing. It’s about relaxing and getting your mind right. When I come here, I forget who I am. We don’t talk about sports.”

If Malone were cast in a Hollywood western movie, he would fit in like a glove. Wait a minute! I believe we have evidence of Malone, the actor, in a western flick. He played Elijah Abel in the 1994 movie “Rockwell.” See photo below: 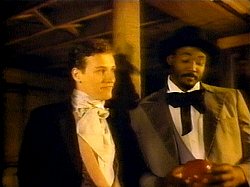 Can you guess the guy on the right? If you said "Karl Malone" you just earned your spurs.

Born and raised in Summerfield, La., Karl Anthony Malone knew only one way to get things – through hard work. He earned every thing he got in life, which sums up his incredible basketball career that is about to be permanently highlighted in the Naismith Basketball Hall of Fame in Springfield, Mass.

The man hardly took shortcuts, possessing a work ethic that is second to none. He is self-man professional athlete who accomplished basically everything needed to be accomplished in the game of basketball, except for winning a championship. But even though he never won an NBA title, he never allowed that void in his basketball life to define him.

But title or no title, the man known as The Mailman delivered one powerful NBA career.

At 6 feet 9 and 260 pounds, Malone was the ideal power forward; a pioneer of the position. If you look up “power forward” in the NBA dictionary, it will say SEE KARL MALONE.

Malone was a physical marvel. Built like a superhero and blessed with a motor that always pushed forward, he demoralized opponents with his brute strength and relentless nature. In 18 years with the Utah Jazz, he led the franchise to two NBA Finals appearances and won two regular-season MVP awards (1997 and 1999). In 1,476 games, he scored 36,928 points – second only to Kareem Abdul-Jabbar. Malone was also dependable. From 1985 to 2003, he missed only 10 games. He was a real basketball iron man.

But Malone had plenty of help in Utah.

John Stockton, the NBA’s all-time leader in assists and steals, made sure The Mailman always delivered on game days. The two formed one of the best 1-2 combos in league history.

Whenever legendary Jazz play-by-play announcer “Hot Rod” Hundley said those words it was like sweet music to Jazz fans and basketball fanatics in the entire state of Utah. Without Stockton and Malone, there would be no Delta Center in Salt Lake City (or Energy Solutions Arena).

Stockton and Malone played 1,412 games together and are immortalized outside of Energy Solutions Arena with bronze statues and an intersection in Salt Lake bears their names.

“We’re sorta like Siamese twins,” Malone said of his good friend John. “I look at him and I was warriors, and we go out and fight battles. There’s no doubt in my mind what he’s thinking and I don’t think there’s any doubt on his mind what I’m thinking when we go on that court, and that’s to win.

“When we’re gone from the game of basketball, when you mention one you gotta mention the other one. If we happen to go to the Hall of Fame one day they’ll probably get us both there together.”

Stockton was inducted into the Naismith Basketball Hall of Fame in 2009, along with Jazz coach Jerry Sloan. “We’ve won and lost a lot of games together. We’ve been through a lot together,” Stockton said of his good friend Karl.

Malone left Utah in 2003 to join Shaquille O’Neal, Kobe Bryant and Gary Payton in Los Angeles, hoping for a Hollywood ending to his storied basketball career. The Lakers reached the 2004 NBA Finals, but lost in five games to the Detroit Pistons. Malone hobbled off the court one final time and never looked back.

That’s not the way a heroic cowboy would ride off to the sunset.

He could have played another season with the Lakers, but decided to retire. Now, depending on who you talk to, there are varying reports on why Malone retired. Here’s one explanation: Vanessa Bryant, Kobe’s Bryant’s wife, had a reported run-in with Malone. In a story published in the L.A. Times in 2004, Vanessa jokingly asked Malone “Hey, cowboy, what are you hunting?” in reference to Malone’s hat and boots. Malone reportedly responded with, “I’m hunting for little Mexican girls.” That last comment infuriated Vanessa, and she told Kobe about it. Kobe confronted Malone about the incident and it caused a major rift between the two.

Whether or not Kobe had something to do with Malone not returning to the Lakers remains unproven. The bottom line is Malone went to L.A. to give it one more shot at winning that elusive title, but fell short.

However, on Aug. 13, 2010, Malone will finally get his title. It will say “Karl Malone, basketball Hall-of-Famer.”