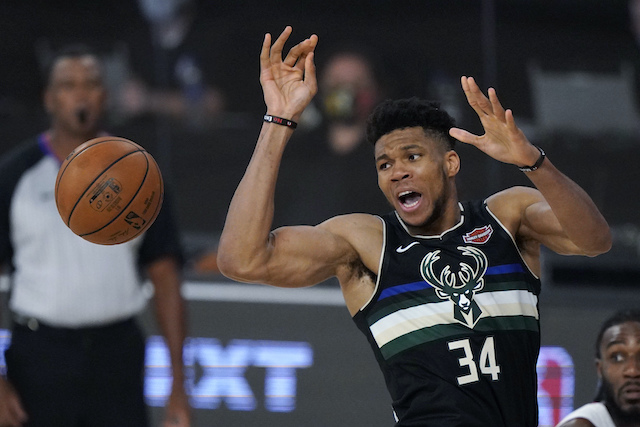 Giannis Antetokounmpo reaches for the ball during a playoff game in the bubble. (AP)

Giannis Antetokounmpo is built like Superman. He stands 6 feet 11 inches tall. He weighs 242 pounds and nearly zero percent body fat. He is chiseled like a Greek god and has a wingspan that can cover the entire Mediterranean Sea.

And as far as skills are concerned, Giannis has those in his bag as well. He can handle the ball like a point guard. He can overpower defenders in the paint for highlight-reel dunks. And he can finish with either hand.

If you could paint a picture of the perfect basketball player, Giannis would come close. Very close.

But the NBA’s newest Superman has a glaring weakness. Antetokounmpo’s kryptonite is shooting. He’s not good at it.

It sounds ridiculous to criticize Antetokounmpo because his stats — 29.5 points, 13.6 rebounds, 55 percent shooting from the field — are astronomical. But if you break down the scouting video, Giannis is flawed offensively. Besides his lack of a consistent 3-point shot, he doesn’t have a face-up or pull-up jumper shot and he forces his way to the basket way too much.

Giannis’ shooting woes reared its ugly head during the 2019 playoffs when the Toronto Raptors formed a defensive fence and dared Giannis to shoot long-range jumpers. When Giannis became hesitant, the Bucks folded and eventually lost to the Raptors in six games.

One year later, it’s deja vu. The problems that frustrated Giannis in 2019 resurfaced in the second-round of the 2020 NBA playoffs in the Disney World bubble against the Miami Heat.

Miami deployed its version of the Giannis D-Fence, throwing different bodies at the Bucks superstar and daring him to shoot over the top. It was a simple strategy but extremely effective. Plus, the Greek Freak isn’t very hard to figure out. He is very predictable. He loves to drive to the hoop. When a defender cuts him off, he’ll use a spin move as a secondary move.

Giannis, defiant and determined to bully his way to the basket, struggled mightily during the series. What may have worked for him during the regular season didn’t work in the playoffs. Playoff teams can lock in on tendencies. Erik Spoelstra and the Heat coaching staff identified Giannis’ weaknesses and exploited them to the max. Giannis forced the issue, got out of rhythm and committed too many offensive fouls (he has over 70 charging calls this season). Jae Crowder, Bam Adebayo, Andre Iguodala, Jimmy Butler and Derrick Jones Jr. took turns in guarding Giannis and all of them made life difficult for the reigning league MVP.

The Bucks — who entered the bubble as the top-seeded team in the East — ended up losing in five games, and were lucky they didn’t get swept.

Antetokounmpo still doesn’t trust his jumper and hasn’t develop enough counter moves. He predictably likes to Euro step his way to the basket after the initial crossover dribble. And he drives to his right, he’ll spin back to his left when you beat him to the spot. The Heat have taken away most of Giannis’ favorite spots and he’s running out of moves. He needs to add more counters, but it’s not going to happen in the bubble. It’ll likely take a whole offseason to rework and retool the Greek Freak’s game.

Luka Doncic gave us the first memorable moment on the court inside the bubble.

The Dallas Mavericks’ young superstar, playing on a badly sprained ankle, put up 43 points on the vaunted Los Angeles Clippers defense, including the dagger step-back 3-point shot at the buzzer to give the Mavericks a 135-133 win in Game 4 of a Western Conference first-round playoff series.

After burying the game-winning jumper, Luka starred into the camera and spewed a primal scream so loud the bubble nearly burst. It was a major statement from the 21-year-old Doncic. He announced to the whole basketball world that he has arrived and he’s not going any time soon.

“My goal is to win a championship,” said Doncic, whose Mavs were eliminated by the Clips in six games but not before putting together one of the most spectacular playoff debuts. The Slovenian sensation averaged 31 points, 9.8 rebounds, 8.7 assists and posted two triple-doubles against one of the best defensive teams in the league. Oh, by the way, he was also the youngest player (21) to ever hit a game-winning shot in the postseason.

“He is one of the toughest players that I have ever seen in this league, and that goes back 35, 36 years,” Mavericks coach Rick Carlisle said of Doncic, who is up for Most Improved Player this year after winning Rookie of the Year in 2019.

“[Luka] is a great young player that is getting better each year,” Carlisle said. “He has an irrepressible enthusiasm for the game, for his teammates, for winning. We’re so fortunate to have him. Now we have to get our roster healthy and get the right players around him.”

Those were the words of Denver Nuggets guard Jamal Murray. It encapsulated what the players were feeling in the bubble and what it meant for them to continue playing and find their purpose.

“I just want to win. In life you find things that hold value. Things to fight for. We found something to fight for,” Murray told TNT’s Jared Greenberg while holding back tears moments after dropping 50 points in leading the Denver Nuggets to a Game 6 win over the Utah Jazz in the first round.

“They give me a lot of power to keep fighting. We want to win. I show my emotions. It comes out.”

When asked why the images of Breonna Taylor and George Floyd, two victims of gun violence, painted on his shoes mean so much to Murray, he said, “This happens everywhere. It’s not just in America.”

“These shoes give me life. Even though these people are gone they give me life. They help me find strength to keep fighting in this world. That’s what I’ll keep doing.”

Murray’s 50-point game was huge, but his postgame remarks was even bigger.