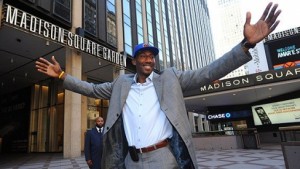 The New York Knicks are banking on Amare Stoudemire to be the face of their franchise.

New York Knicks conditioning director Greg Brittenham recently organized a three-minute running drill at the Knicks practice facility with a little twist. He has players tossing a football around to keep things light and interesting. Amare Stoudemire, wearing his familiar No. 1 jersey, picked up one of the footballs and fired it across the court with ease. First down Knicks!

Though it was nice to see that Stoudemire’s right arm is good enough to fling a football a good distance, the Knicks won’t be asking the 6-foot-10 power forward to be passing the ball this season; they’d rather see him be on the receiving end of passes from teammates and rocking the rim with his signature tomahawk dunks.

There is an air of optimism around the Knicks these days, and it’s all because of the man wearing No. 1 in a Knick uniform. The Knicks haven’t had a legitimate All-Star big man who can severely affect the game on both ends since – dare I say – Patrick Ewing. Stoudemire is a game-changer; a career 21.4 scorer and arguably one of the best finishers in the game.

Stoudemire left Phoenix and signed a five-year, $100 million contract with the Knick, reuniting him with D’Antoni – his former coach with the Suns. Stoudemire is re-energized by the fact that he is now, without a doubt, the leader of an NBA franchise and the headliner at the world’s most famous arena. Though he was an All-Star in Phoenix, he was always in the shadow of Steve Nash. Now, Stoudemire is front and center with the Knicks.

“He’s always been one of the best players in the league,” D’Antoni said of Stoudemire, now entering his eighth season in the NBA.

“I don’t want to talk about the past but I do know one thing, the leadership he has shown and the intensity that works out and the dedication that he has brought [to the Knicks], you do not get better than what he’s doing right now. It’s a credit to him and he’s come a long ways,” D’Antoni continued. “I’ve always been impressed with his talent. That’s been off the charts. But his leadership right now is off the charts.”

D’Antoni said Stoudemire began working out at the facility in early September and hasn’t stopped since, setting the tone for the rest of the squad. “He has been one of our hardest workers,” the Knicks coach said.

His presence can only help the young players on the roster, including guard Toney Douglas and budding star Danilo Gallinari, who had a breakout season in 2009-10. In his first full season in the NBA, the 22-year-old Gallinari averaged 15 points per game and made 186 3-point shots. Those numbers will only get better now that Stoudemire will be patrolling the paint.

It remains to be seen if Stoudemire’s rise to power in the league was greatly influenced by Nash. The only way Amare can disprove that is to get the Knicks back into playoff contention. And if he does that, then he’ll be officially named king of New York.