LeBron James claims he is keeping a journal to document all the haters who ridiculed him for jilting Cleveland for Miami this past summer. What he should be focusing on is rehabilitating his shattered image and learning how to make better decisions in the future. It had nothing to do with race, LeBron!

On the court, expect nothing less than another MVP season from the NBA’s reigning most valuable player – and he’ll have Dwyane Wade and Chris Bosh to lean on when things get too heavy. There is little doubt that the new-look and new-improved Miami Heat is the beast of the Eastern Conference for the 2010-11 season. But there are two other teams in the East who could crash the party in South Beach: Boston and Orlando.

The Celtics, last time we checked, is the defending Eastern Conference champions and, when healthy, they remain a powerhouse. And you can’t find a more tough-minded ballclub. Last year, head coach Doc Rivers managed some of his “older” players so that they are ready to go for the playoffs. Expect much of the same this season, as Rivers will lean on Rajon Rondo even more during the regular season and the roles of bench players Nate Robinson and Glen Davis could expand.

At one point during last year’s playoffs, the Magic were the sexy pick to make the NBA Finals. But something went terrible wrong during the series with the Celtics and the Magic left very disappointed. Orlando is probably regretting not re-signing Hedo Turkoglu because Wince Carter can’t be relied on during crunch time. Dwight Howard must add some post-up moves to his game in order to lift the Magic past the Heat and Celtics.

The rest of the conference will be fighting for the other five spots. Chicago and Milwaukee will be competing for the Central Division title, and with it homecourt advantage in the first round. Atlanta has been moving up the ladder the past two seasons, but the Hawks have some in-house issues they must address. Larry Brown is good enough to get Charlotte in the playoffs, but the Bobcats may max out at No. 6-7. The final two playoff berths will come down to Charlotte, New York, Washington and Cleveland (yes, even without LeBron).

1. MIAMI HEAT (Projected record: 66-16)
The moment LeBron said “he’s taking his talents to South Beach” the Miami Heat instantly became the team to beat in the East. Nothing against the Boston Celtics or the Orlando Magic, the last two NBA finalists from the conference, but the reloaded Heat have the recipe for an NBA title. They have arguably two of the best perimeter players in the league in James and D-Wade, an All-Star forward in Bosh who won’t clog the lane and is a decent rebounder, a capable sniper in Mike Miller and a veteran frontline that includes Zydrunas Ilgauskas and Udonis Haslem. And don’t underestimate Erik Spoelstra as a game manager. There is a reason why Pat Riley handpicked him to take over the Heat program. 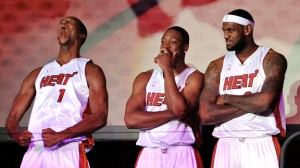 Chris Bosh, Dwyane Wade and LeBron James haven't played a meaningful game together as members of the Miami Heat, but they're still favored to win the East. (GETTY IMAGES)

2. ORLANDO MAGIC (Projected record: 60-22)
Stan Van Gundy is a very underrated head coach, and he certainly has a great feel for this Orlando team. Van Gundy has point guard Jameer Nelson to execute his offense, and Nelson has been playing at an all-star level the past two seasons. The plight of the Magic starts and ends with all-world center Dwight Howard. If Howard ever decides to improve on his low-post skills and become a more consistent, then the Magic could move into championship level. But if Howard stays status quo, then the Magic will fall back into the second tier of NBA contenders.

3. BOSTON CELTICS (Projected record: 58-24)
The Celtics are a year older and another deep postseason run has added more mileage to Kevin Garnett, Paul Pierce and Ray Allen. Doc Rivers claims that KG will be better this season because his leg is now completely healed, but Rivers may be underestimating Garnett’s odometer. Pierce came into training camp in great shape, losing at least 10 pounds. Despite his advanced age, Allen remains a top gun in the league and he’ll have a better backup in Delonte West. Young guns Rajon Rondo, Nate Robinson and Glen Davis will need to do most of the heavy lifting during the regular season to keep the old guys fresh for the playoffs.

4. CHICAGO BULLS (Projected record: 54-28)
This season, Derrick Rose will have to adjust to a new head coach in Tom Thibodeau and a new backcourt partner with the departure of the very dependable Kirk Hinrich, who really complemented Rose well the past two seasons. Free agents Ronnie Brewer and Kyle Korver will share time at shooting guard. The addition of power forward Carlos Boozer – whenever he’s ready to come off the injured list  – will help Chicago’s points in the paint and provide much-needed help to Joakim Noah on the boards. Boozer sets excellent screens and should fit into the Bulls’ pick-and-roll sets.

5. MILWAUKEE BUCKS (Projected record: 52-30)
Scott Skiles is one of the most underrated coaches in the league and that was more evident last year when he pieced together a broken-down team and got them to the playoffs. Skiles’ floor general is second-year point guard Brandon Jennings, who could have easily been the 2010 Rookie of the Year. With a year under his belt, including a playoff appearance, Jennings is ready to take that next step and jump into the conversation that includes Rondo, CP3, D-Will, D-Rose, Nash and Westbrook. A healthy Andrew Bogut is the only thing keeping the Bucks from winning the Central Division.

6. ATLANTA HAWKS (Projected record: 51-31)
After winning 53 games last season, the Hawks will take a step back this season. The Hawks gave a ton of money to Joe Johnson (probably undeserved), but didn’t really improve their roster. With powerhouses Miami and Orlando in the same division, the Hawks will be hard-pressed to duplicate last year’s feat. Larry Drew takes over for Mike Woodson, who did a nice job rebuilding the Hawks but just couldn’t get them into the first tier. Drew is contemplating about moving undersized center Al Horford to power forward, move that will surely force Marvin  Williams to the bench. Reigning Sixth Man of the Year Jamal Crawford wants a new deal, but after giving Joe J. a fat $124 million contract, Crawford will be lucky if he remains in the ATL.

7. CHARLOTTE BOBCATS (Projected record: 46-36)
Larry Brown is one of the best Xs and O’s bench jockeys in league history, and he will need every ounce of his teaching skills to get this Bobcats team into the playoffs again. Charlotte will lean heavily on swingmen Stephen Jackson and Gerald Wallace to set the tone for the tough-minded Bobcats, who led the league in defense last season. D.J. Augustin will take over the role of starting point guard with the departure of Raymond Felton. Brown has always preferred Augustin over Felton anyways so this shouldn’t be a tough transition. The biggest weakness for Charlotte is its ineptness on the offensive end. When Jackson is not hitting his shots and Wallace is sidelined (which is guaranteed to happen), the Bobcats can barely score 70 points.

8. WASHINGTON WIZARDS (Projected record: 43-39)
How good is John Wall? He’s good enough to push the Wizards into the playoffs this season. The 2010 first overall pick out of the University of Kentucky is a special player, and he will be the 2011 Rookie of the Year. Wall destroyed the competition at the NBA Summer Pro League in Las Vegas and paired really well with young stud JaVale McGee, who nearly made the U.S. national team. The addition of Kirk Hinrich helps the Wizards in a couple of ways: 1) he adds a veteran presence on offense and 2) he’s a lock-down defender, something the Wizards have never had since their Washington Bullets days. Gilbert Arenas has a lot to prove this season and could contend for Comeback Player of the Year.