Despite all the hoopla in South Beach, the road to the NBA championship still runs through the Los Angeles Lakers. Size still matters and, last time I checked, the two-time defending champions still boasts the best frontline in basketball.

As good as Kobe Bryant is – and he’s in the Michael Jordan conversation should he win another championship ring – the Lakers’ greatest weapon is their length. Seven-footers Pau Gasol and Andrew Bynum (when healthy) form the best twin towers since Olajuwon and Sampson. Then, you add 6-10 Lamar Odom into the mix and you have arguably one of the best and deepest frontlines in league history.

Oh, and the Lakers have a guy name Kobe on their team. I hear he’s pretty good. Bryant remains the most feared clutch player in the league and nobody closes a game better than the Black Mamba. He did it six times last season. Six times! LeBron James doesn’t have six game-winners for his career. And when Kobe is covered, the Lakers can always turn to Derek Fisher. The Lakers’ co-captain is one of the best big-game players in the Association (see Game 3 against the Celtics in the NBA Finals), but his importance stretches beyond the basketball court. Bryant, oftentimes, leans on D-Fish, who is the ONLY player on the Lakers’ roster who has Kobe’s ear – and that includes the assistant coaches.

Phil Jackson insists that this will be his last year. The Zen Master would love nothing more than to close out his Hall-of-Fame career with a 12th NBA championship and his fourth 3-peat. Can’t wait for Phil’s next book. It could titled “The Dirty Dozen,”  and “dirty” in a good way.

The Lakers are the clear-cut favorites to win the West again, and the rest of the conference will be playing for spots 2-8. The last four playoff positions probably wont’ be determined until the last day of the season. Holdovers San Antonio and Denver will be fighting off Portland, Houston, Phoenix, Sacramento and Memphis all season for the fifth and sixth seeds, but the final two berths could come down to the Blazers, Rockets, Suns, Kings and Grizzlies.

1. LOS ANGELES LAKERS (Projected record: 60-22)
Kobe Bryant has basically accomplished everything in his illustrious career. Should he win another title, it would be his sixth and that would tie him with his idol Michael Jordan. Kobe would have to go through, most likely, Miami or Boston to win his sixth ring and beating LeBron James and Dwyane Wade in The Finals certainly is more impressive than Jordan beating John Stockton and Karl Malone. A sixth championship definitely puts Kobe in the same conversation – dare I say – with The Great MJ, and cements Bryant as the best player of his generation. With a healthy Andrew Bynum, the Lakers boasts the best six-man rotation in the Association: Fisher, Kobe, Ron Artest, Gasol, Bynum and Odom. 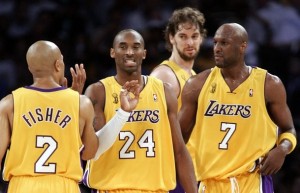 Derek Fisher, Kobe Bryant, Pau Gasol and Lamar Odom are all back to defend their NBA title. (REUTERS)

2. OKLAHOMA CITY THUNDER  (Projected record: 59-23)
Kevin Durant and Russell Westbrook will benefit from their experience in the FIBA World Championship, and the Thunder will make that leap from pretenders to contenders. Oklahoma City gave the Lakers a run for their money during last year’s playoffs, extending the series to six games on pure youthful exuberance. Now, with another year under their belts, Durant and Co. should win the Northwest Division and challenge for homecourt in the Western Conference. Speaking of KD, the reigning NBA scoring champion showcased his clutchness during the FIBA Worlds, as he almost single-handedly carried Team USA to the gold medal. Many experts are picking Durant to win the MVP, and hard to disagree with that prediction. Here’s another bold prediction: OKC will play the Lakers in the Western Conference finals.

3. UTAH JAZZ  (Projected record: 57-25)
Am I the only one in the basketball who thinks that Al Jefferson is an upgrade over Carlos Boozer? Most observations believe that the Jazz took a step back when the All-Star power forward left town and headed for Chicago. I disagree. When healthy, Jefferson is a very underrated post player, probably one of the five best in the West. He’s a 20-10 player who is taller (6-10 vs. 6-8) than Boozer, who struggled mightily against the Lakers’ lengthy big men during the playoffs. The Jazz are also more versatile with Jefferson, who can play center on occasion, and this allows high-energy guy Paul Millsap more court time. With Boozer gone, there is no doubt that Deron Williams is now the face of the franchise. D-Will is up to the challenge and he should be good enough to lead his team to 55 wins.

4. DALLAS MAVERICKS  (Projected record: 55-27)
The new-look Mavs gave a very weak performance in the first round and got bounced by their nemesis, the San Antonio Spurs. Head coach Rick Carlisle pressed the panic button a little bit during that series and he probably cost his team the series when he failed to insert Roddy Beaubois earlier than he did. Owner/president/head coach/general manager Mark Cuban has publicly pushed for Carlisle to use the lightning-quick Frenchman, who could turn into a major player and make the Mavs more dynamic on offense. He has shown flashes of brilliance, but injuries have derailed his progress. Dirk Nowitzki is a year older, but he continues to play at a very high level. He has more help now with Caron Butler and Shawn Marion, and the addition of center Tyson Chandler will bolster the frontcourt but not enough to overcome the Lakers and the Thunder in the West.

5. DENVER NUGGETS  (Projected record: 53-29)
Having George Karl back is huge for the Nuggets. The players like him and he knows this team better than anyone. All the trade talk that surrounds Carmelo Anthony will disappear should the Nuggets start winning. The addition of Al Harrington provides more firepower to an already potent offense. The health of Nene is key because he gives the Nuggets a legitimate low-post scorer. Chauncey Billups may be a year older, but he remains one of the best point guards in the league. Karl will try to minimize Billups’ minutes by expanding the role of Ty Lawson. The wild card here is J.R. Smith. When Smith is hot, the Nuggets become a special team. When he’s  cold,  the Nuggets become ordinary.

6. SAN ANTONIO SPURS (Projected record: 52-30)
Gregg Popovich is one of the best coaches in the league, and he’ll need all his managerial skills to keep his aging team from falling completely off the playoff chart. Tim Duncan came into training camp in good shape, but it is hard to ignore all the mileage TD has on his odometer. Manu Ginobili signed an extension last year and he rewarded the Spurs with one of his best seasons as a pro. Ginobili remains the X Factor for the Spurs because no one on the roster can duplicate what he can do on the court. This is a contract year for Tony Parker so he’ll be motivated to play well. If the Spurs struggle, don’t be surprised if they trade Tony P. before the deadline. George Hill and DeJuan Blair emerged as big-time contributors last season, and their roles should expand this season. The addition of Tiago Splitter allows Duncan to move to his preferred power forward slot and gives San Antonio a better option at center.

7. PORTLAND TRAIL BLAZERS  (Projected record: 51-31)
At times, the Trail Blazers seem a little dysfunctional. Brandon Roy wants more touches, Andre Miller is not happy with his role, Rudy Fernandez is homesick and wants to return to Europe, and head coach Nate McMillan can’t seem to find the right combination on the court. But somehow, Portland always manages to get in the playoffs and it’ll be the same story this season. The X factor is Greg Oden. If he can stay upright, which is a big IF, the Blazers could move up in the standings. The odds are stacked against  him, though. The Curse of Sam Bowie is very much alive.

8. HOUSTON ROCKETS  (Projected record: 50-32)
Doctors have told the Rockets to limit Yao Ming’s court time to 24 minutes so, as an insurance policy, Houston picked up Brad Miller. This may be one of the best acquisitions during the offseason. Miller is very familiar with Rick Adelman’s Princeton offense and one of the best passing big men in the league. Kevin Martin and Aaron Brooks gives the Rockets a very explosive backcourt. Both can create their own shot and are fearless. With Trevor Ariza gone, Shane Battier moves back into  the starting lineup. Luis Scola recently signed a long-term deal to stay in Houston and his presence should not be underestimated.