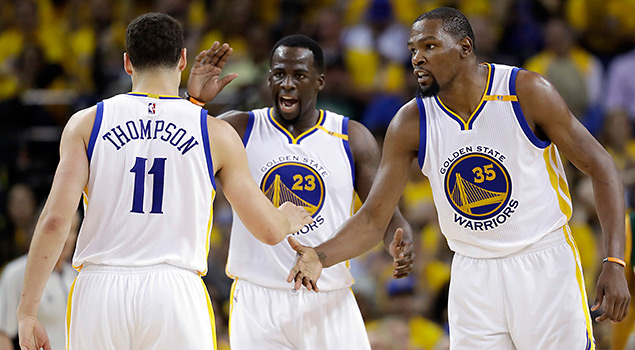 All the wheeling and dealing and activity by many teams are meant to accomplish one goal: beat the Golden State Warriors.

Check that. Try to keep up with the Warriors.

The Dubs are coming off a 67-win season and a second NBA title in three seasons. Golden State has compiled a mind-boggling 207-39 record in that span, including a record 16-1 run during the 2017 playoffs.

The Warriors barely did anything this summer, and why would they. They return every significant player from their championship run, and they get head coach Steve Kerr back for a full season (hopefully). Barring a major injury, the Dubs should be the clear favorite in the Western Conference and sweep their way to a  fourth consecutive trip to the NBA Finals. About the only drama left is, can anyone win a playoff game against the Warriors? It’s the Warriors’ world and everyone else is playing for second.

1-GOLDEN STATE WARRIORS: The fearsome foursome of Steph Curry, Kevin Durant, Klay Thompson, and Draymond Green are poised for another historic season. Based on the team’s preseason trip to China, Curry and Thompson look to be in midseason form. In a league that has become 3-point happy, Curry, who signed a five-year, $201 million contract in July, remains the undisputed king of the 3-ball. And his backcourt mate, Klay, is not too far behind. NBA defenses have yet to figure out how to stop the Splash Brothers, who combined for 592 threes last season. Steph (29) and Klay (27) are in the prime of their careers, and neither one appears to be slowing down. Draymond is poised to win a second Defensive Player of the Year award and KD, well, the season can’t start soon enough for one of basketball’s biggest stars. Durant had an interesting offseason to say the least. Maybe he was bored. Maybe he needs extra motivation. Whatever the case may be, Durant is ready for another MVP season and shut down all the haters. Prediction: 69-13

2-HOUSTON ROCKETS: The Rockets made the deal with the L.A. Clippers to acquire point guard Chris Paul to try to leapfrog over the San Antonio Spurs and close the gap with the Warriors. The trade may be enough to overtake the Spurs, but it didn’t quite close the gap with the Warriors. In that case, the team went 1-for-2. CP3 is a definite upgrade over Patrick Beverley, and he can keep the chains moving when James Harden takes a breather. When the two are on the court together, Mike D’Antoni will split the court in half. CP3 will run pick-and-rolls on the right side of the court, while Harden will run pick-and-rolls on the left side of the court. Prediction: 59-23

3-SAN ANTONIO SPURS: The Spurs won 61 games in the first year of the post-Tim Duncan era. Kawhi Leonard is now firmly entrenched as the leader of the team, while soon-to-be Hall-of-Famers Tony Parker and Manu Ginobili are winding down their careers. Finding replacements for Parker and Ginobili are on top of Gregg Popovich’s to-do list. As the Spurs continue to transition to Kawhi’s team, LaMarcus Aldridge must become more of a factor if San Antonio wants to stay relevant in the West. The addition of Rudy Gay should help the Spurs’ small ball offense, while super sub Patty Mills will keep the seat warm until Parker returns from his leg injury. The Spurs remain a powerhouse in the West, but the Rockets and Thunder are catching up. Prediction: 58-24

4-OKLAHOMA CITY THUNDER: With the additions of Paul George and Carmelo Anthony, reining league MVP Russell Westbrook now has two studs on the wings. There is no reason for Russ to wing it on his own. George gives OKC a tremendous two-way player who can take pressure off Westbrook running the offense and guarding the other team’s best guard. Melo looks refreshed and could be an important player in late-game situations, where OKC struggled mightily last season when teams loaded up on Westbrook. OKC should be significantly better defensively with George and Andre Roberson defending the wings and Steven Adams guarding the paint. If OKC can knock down enough 3-point shots (another phase of the game it struggled last season) it should challenge the Spurs and Rockets for the second-best record in the West. Prediction: 57-25

5-LOS ANGELES CLIPPERS: Now that CP3 is gone, the Clippers look to Blake Griffin to lead the franchise. Griffin was awarded with a five-year, $173 million contract to be the face of the team, and this season will be a litmus test of his leadership skills. Behind Griffin and center DeAndre Jordan, L.A. should overpower teams with its big frontline. The Clips are one of the few teams in the league who have not embraced small ball. Their power game should be good enough to reach the playoffs, but far from challenging for a title.  Prediction: 48-34

6-UTAH JAZZ: The Jazz had one dreadful offseason. On top of losing leading scorer Gordon Hayward to free agency, the Jazz could potentially lose up-and-comer Dante Exum for the season because of a shoulder injury. Head coach Quin Snyder will have his work cut out for him as he tries to patch together a lineup to navigate through a very difficult conference schedule. Snyder will lean on his top-rated defense led by 7-1 center Rudy Gobert. The Stifle Tower had a league-best 4.1 blocks per game and anchored a defense that gave up just 96 points a game. Newly acquired point guard Ricky Rubio is an upgrade from George Hill, and watch out for rookie shooting guard Donovan Mitchell. Prediction: 45-37

7-PORTLAND TRAIL BLAZERS: The Blazers have one of the best backcourt tandems in the league. But it’s a gift and a curse. Damian Lillard and C.J. McCollum as so good they mask the Blazers’ weaknesses. If the Blazers are going to make a playoff push they need another player to step forward to help Lillard and McCollum. That player could be 23-year-old, 6-11 center Jusuf Nurkic. When the big man from Bosnia is healthy, he looks like a young Arvydas Sabonis. When he’s hurt, he looks like a young Sam Bowie. The Blazers are hoping the young Sabonis shows up. Prediction 43-39

8-MINNESOTA TIMBERWOLVES: Defensive guru Tom Thibodeau won just 31 games in his first season in Minnesota. He knew he needed to bring in more defensive-minded players to run his ultra-aggressive style. Mission accomplished. Thibs brought in his former pupils from Chicago, Jimmy Butler and Taj Gibson, to bring a little bit of nasty to Minnesota. Butler joins Karl-Anthony Towns and Andrew Wiggins in a starting lineup that’s about as good as any in the West (except the Warriors, of course). A better defensive approach should be enough to push the Wolves to their first playoff appearance in 13 years. Prediction: 42-40