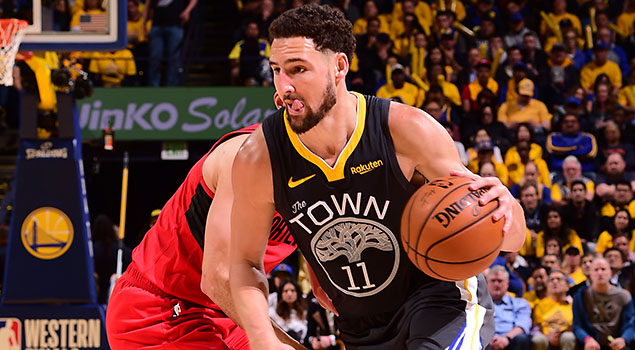 Klay Thompson was snubbed on the All-NBA team. (Getty Images)

Klay Thompson is a three-time NBA champion and has been to five straight NBA Finals. The Golden State Warriors swingman is regarded as one of the five best shooters in the world, and you can argue teammate Steph Curry is the only player in the world who can match his 3-point shooting prowess.

Thompson is also a terrific perimeter defender, oftentimes matched up against the opposing team’s best guard. And, oh by the way, Klay can score 60 points without taking more than 10 dribbles. How many guys in the league can say that? Probably none.

Despite having a basketball resume made for Springfield, Thompson was snubbed when the 2019 All-NBA teams were announced.

You can make a case the writers got it right on the first and second teams, although the way Kawhi carried the Toronto Raptors in the 2019 Eastern Conference playoffs he probably deserves to be on first team.

The big debate is the players who made the third team. With the exception of Westbrook, you could easily swap out four spots.

As good as LeBron’s stats were during his shortened season with the L.A. Lakers, he didn’t make the playoffs so his insertion on the third team was more a lifetime achievement award. Gobert was more suited to be on third-team all-defense and there is no reason to have Griffin on any All-NBA team. But the player who got Thompson’s attention was Kemba. When Klay was told Kemba got in ahead of him, his eyes rolled. He tried to be nice by not completely dissing Kemba, but deep down Klay knows who’s the better player.

“When you go to five straight Finals, it takes more than a couple All-NBA guys,” Thompson said. “Do I think there are that many guards better than me? No.”

During Thompson’s appearance on ESPN’s The Jump, Tracy McGrady said to him, “Now I know you don’t care about being snubbed on the All-NBA team.” Klay replied with, “Oh, I cared.”

Here’s how the All-NBA teams should have looked:

Thompson lost out on an extra $30 million on a potential deal this summer when he becomes a free agent. Instead of the supermax contract worth $221 million, Thompson would “only” get $191 million. Still not bad, but Thompson has earned the right to be called a superstar in the NBA and deserves to be paid like a superstar.

Klay is the only player who can fit into any system. His game suits all 30 NBA teams. KD, LeBron, Harden, Giannis and Kawhi all need the basketball the majority of time to be truly impactful. Klay doesn’t need to dominate the ball to dominate a game. He can do it the most efficient way. And he’s low maintenance. He plays hard every possession and does whatever it takes to win.

So for all the NBA writers who didn’t vote for Klay on first, second or third All-NBA, y’all need your credentials revoked.