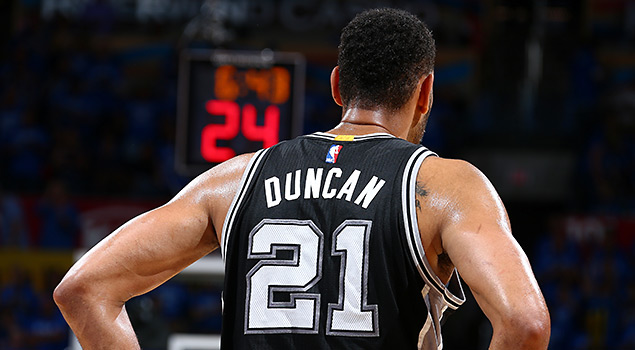 Tim Duncan retires after 19 seasons with the Spurs. (GETTY IMAGES)

When Tim Duncan announced his retirement from basketball, there were no journals in the Players’ Tribune or made-for-TV specials or farewell tours. He revealed his decision in a one-page press release.

His final game turned out to be a loss in Game 6 of the 2016 Western Conference semifinals at Oklahoma City. When the final buzzer sounded, he pointed up to the sky and walked off the court.

That move epitomized Duncan’s professional career. He was a model of consistency. A selfless player who built his resume on fundamentals, chosing substance over style. He wasn’t enamored with statistics or commercials. All he cared about was winning — and he won a lot.

Duncan won five NBA championships with the Spurs, the only team he played for in 19 years. He won three NBA Finals most valuable player awards, two regular-season MVPs and was on the all-defensive teams 15 times. He is one of two players with more than 26,000 points, 15,000 rebounds and 3,000 blocks. His Spurs teams won 70% of their games and didn’t miss the playoffs since he was drafted in 1997.

Former Spurs guard Antonio Daniels described Duncan as “the greatest teammate in the history of sports.”

Hard to argue that claim since Duncan always put the Spurs first before anything else. He took massive paycuts in order for the franchise to sign other great players. He took a page out of NBA ambassador David Robinson’s book by mentoring young players and teaching them how to be a professional, something that gets lost with all the money and fame that come with being in the limelight.

If I were to create the “perfect” starting five, Duncan would be on it.

And Kareem Abdul-Jabbar at center.

Now, I know there is no such thing as a “perfect” lineup because it’s purely subjective. But this is my mythical five. Take it for what it’s worth.

Magic and Jordan are the gold standards at their respective positions. Kareem was the greatest low-post scorer in basketball and Bird was the ultimate sniper among all forwards. That leaves us with one spot who will set on-ball or off-ball screens, rebound, play defense, and score a basket here and there to keep the defense honest. That’s Tim Duncan.

Duncan was a superb pick-and-roll or pick-and-pop guy who didn’t need the ball all the time to excel. He was also a fantastic rebounder and rim protector.

Former Knicks coach and current ABC/ESPN basketball analyst Jeff Van Gundy said Duncan would have been a perfect fit in any city or system because of his personality. “He doesn’t take a backseat to anyone who has ever played the game,” Van Gundy said on ESPN’s SportsCenter. “He brought in a different leadership style for a best player. More of an encouraging leadership style.

“He has the right amount of ego. You have to have ego to be an all-time player in any league, particularly in the NBA where the competition is so stiff. He had team ego more than self ego. One of the great things for me is to watch Duncan get coached hard. When he got coached hard by [Gregg] Popovich whether in practice or games he didn’t always liked it or agreed with it but he always took it. When your best player takes hard coaching every other player falls into line. Duncan’s coachability was one of the highest I’ve ever seen from an all-time great player.”

Most pundits and players — like LeBron, Dirk Nowitzki and Shaq — call Duncan the “greatest power forward” in history. Although it’s true Duncan played the big forward position especially in the early part of his career when David Robinson was the Spurs center, he probably spent more time at center. When Spurs coach Gregg Popovich was asked at the start of a playoff series who would start at center, he answered in classic Popovich way: “Tim Duncan. Like we have for the last 15 years.”

Whatever position Duncan played is irrelevant. His legacy is secure. He’s certainly among the 10 greatest to play the sport. He just didn’t want to be the center of attention.