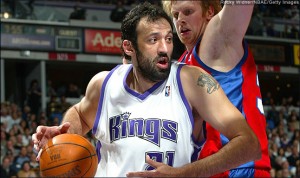 Vlade Divac played 16 productive seasons in the NBA, six with the Sacramento Kings. His jersey No. 21 now hangs in the rafters in Arco Arena. (NBAE/GETTY IMAGES)

Vlade Divac’s No. 21 jersey was recently retired by the Sacramento Kings in honor of the groundbreaking Serbian center’s six successful seasons with the club.
Divac was the emotional leader and most popular player on the best teams in the franchise’s history, including the Kings’ back-to-back Pacific Division champions and the 2002 Western Conference finalists. He is the second-leading rebounder in Kings history, and he endeared himself to California’s capital city with extensive charity work.
Divac played 16 NBA seasons, including eight with the Los Angeles Lakers and two with the Charlotte Hornets, and enjoyed six solid seasons with the Kings.
Even though he was not the first European player drafted by an NBA team, Divac’s successful run in the Association paved the way for a new wave of European ballers such as Dirk Nowitzki, Peja Stojakovic, Pau Gasol and Tony Parker.

OneManFastbreak.net rates the top 10 European-born players who have played in the NBA:

10) Šarunas Marčiulionis – At 6-5, 200 pounds and left-handed, he was the original Manu Ginobili. He was incredibly strong for a guard, and was fearless when he drove to the basket. He led the Soviet Union to a gold medal in the 1988 Summer Games, prompting a change to Olympic basketball and launching the development of the 1992 Dream Team. Marciulionis was drafted by Don Nelson in 1987, but did not play for the Golden State Warriors until 1989 when he entered the NBA as a 25-year-old rookie. His best season came in the 1991-92 season when he averaged 18 points per game off the bench.
9) Vlade Divac – A very skilled 7-footer who thrived in the Princeton Offense, where it showcased his ability to shoot or pass the ball near the free-throw line. Divac was more finesse than power. Considered the ambassador of Yugoslavian basketball to the United States. He was a good NBA player, but an even better person off the court. Divac, a Serb, and Drazen Petrovic of Croatia made it possible for NBA scouts to believe in the European player. Although he started and ended his career with the L.A. Lakers, Divac’s best seasons were spent in Sacramento where he served as the team leader of the run-and-gun Kings and took young Euros such as Peja Stojakovic and Hedo Turkoglu under his wing.

8) Andrei Kirilenko – Owns one of the best nicknames in sports. The man they call “AK47” is one of the most versatile players in the world and can definitely fill a stat sheet. AK47 is always among the league leaders in blocks and steals. He was the 24th player taken in the 1999 NBA draft and has played his entire career with the Utah Jazz. The 6-9 forward has been a member of the all-defense team three times (he made first-team all-defense during 2005-06 season).
7) Arvydas Sabonis – NBA fans never got to see the real Sabonis because multiple knee surgeries robbed him of his mobility when he got to Portland. He was still very effective for the Blazers, helping Portland become a Western Conference power from 1999 to 2001. But if the Blazers had gotten the 7-foot-3, 290-pound Lithuanian center when he was in his prime, the Blazers could have won a championship or two. Just ask David Robinson how good Sabonis was back in the 1988 Olympics when Sabonis schooled Mr. Robinson, who at the time was the reigning college player of the year.
6(t) Peja Stojakovic – At one point of his young professional life, he was considered the best pure shooter in the world. The native of Serbia and Montenegro was drafted by the Sacramento Kings in 1998, at the suggestion of Vlade Divac, and began making his mark during the 2000-01 season when he averaged 20.4 points as the starting small forward for the Kings. For the next five season, Stojakovic averaged more than 20 points per game and always among the league leaders in 3-point shooting. After a brief stint in Indiana, Stojakovic has been a member of the New Orleans Hornets for the past three seasons and has become Chris Paul’s favorite basketball sniper.
6(t) Detlef Schrempf – The native of Luverkusen was the pioneer of German basketball players. After a successful stint at the University of Washington, Schrempf was drafted by the Dallas Mavericks in 1985 and went on to play 16 seasons in the NBA. His best years were spent in Indiana and Seattle. He was named sixth man of the year in 1990-91 and again in 1991-92. He was named to the all-star team in 1993, 1995 and 1997. In 1996, he was a part of the Sonics team that played lost to the Bulls in the NBA Finals. Detlef would be a lot higher on this list if he didn’t have such a bad reputation for being surly.

5) Dražen Petrović – He died in a car accident on July 7, 1993, on the highway in the vicinity of the German town of Ingolstadt, one day after his last game in a Croatian national team jersey at the qualifications tournament for the European championship in Wroclaw. Though his career was cut short by his untimely death, Petrovic left enough of an impact in the game that he was elected to the Naismith Basketball Hall of Fame in 2002. His last two seasons was spent in New Jersey, averaging 20.6 in 1991-92 and 22.3 in 1992-93. He made third team All-NBA in his fourth and final season in the NBA.
4) Toni Kukoć – Enjoyed a legendary career in Europe that earned him nicknames such as “The Croatian Sensation,” “White Magic,” and “The Waiter” for his ability to serve and dish the ball to teammates. The 6-10 forward starred for Benetton Treviso from 1991-93. He joined the Chicago Bulls in 1993 as a 25-year-old rookie, shortly after Michael Jordan’s first retirement from the NBA. In 13 NBA seasons, the six with the Bulls, Kukoc was regarded as one of the best sixth men, winning the award in 1996. Kukoc has three championship rings and a reputation for making clutch shots.
3) Pau Gasol – If there was a player influenced by the 1992 Dream Team, it was Pau Gasol. He was 12 years old when he saw firsthand the greatest collection of basketball stars all under one flag playing in his backyard in Barcelona. Now, Gasol is the face of Spanish basketball. He is easily the greatest basketball player to come out of Spain and we now just realizing his true talents as the perfect complement to Kobe Byrant. Gasol is a big reason for the popularity of the sport in his country and for the influx of Spanish players in the NBA, such as Jose Calderon, Sergio Rodriguez, Rudy Fernandez and his brother Marc.
2) Tony Parker – When San Antonio coach Gregg Popovich handed the keys to the franchise to this ultra-quick point guard when he was only 19 years old, you knew he was special. With Parker, who was born in Belgium but grew up in France, at the controls, the Spurs just took off. Parker was on championship teams in 2003, 2005 and 2007. He became the first European-born player to win the MVP of the NBA Finals. He is enjoying his best season in 2008-09, averaging career highs in points (21.8) and assists (6.9). Parker’s success opened the doors for other Frenchmen such as Boris Diaw and Mikael Pietrus. The three-time NBA all-star is also married to actress Eva Longoria, which gives him bonus points. 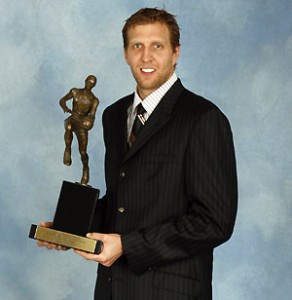 1) Dirk Nowitzki – The first and only European-born player to win the NBA’s regular-season MVP when he took home the Maurice Podoloff trophy during the 2006-07 season. After a slow start to his rookie season in 1998, the 7-footer from Wurzburg, Germany, showed he belonged in the league when he raised his scoring average from 8.2 to 17.5 during his second season with the Dallas Mavericks. For then on, he has become a fixture in all-star games and on the All-NBA teams. He is an eight-time NBA all-star and has been named to the All-NBA first team three times. Nowitzki increased his scoring average to 21.8 points during his third season, and his scoring has never dipped below that number since. He averaged a career-best 26.6 points in the 2005-06 season when he led the Mavs to the NBA Finals. For the 2008-09 season, Nowitzki ranks in the top 10 in points per game (25.7), field goals made, field goal attempts, minutes played and free throw percentage. Nowitzki owns one of the purest shots in the game, a big man with an accurate jumper.