Overanalyzing the NCAA Tournament bracket is about as common as allergies in springtime. That’s why they call it March Madness because college basketball followers, as well as non-followers, get too wrapped in sleepers, bracket-busters, upset specials and ESPN’s Bracketology.

That last entry is the root of all evil. Can someone explain to me what is a Bracketology? Is it a cross between biology and philosophy? And does ESPN’s Joe Lunardi have a doctorate in Bracketology? I love what ESPN has done for college basketball, but the whole Bracketology thing is just overkill.

So-called experts from the Worldwide Leader network lead us to believe that they are Nostradamus and they have all the answers. In reality, picking winners is one big roll of the dice. It’s easy to predict No. 1 seeds vs. No. 16 seeds. It gets a little dicey from that point on.

Here’s my prediction: The Kansas Jayhawks and the Kentucky Wildcats will play for the National Championship.

The Jayhawks have an NBA-type starting five, beginning with point guard Sherron Collins and ending with center Cole Aldrich. Both men have a championship pedigree, having experienced and played on Kansas’ national championship team two years ago. Add freshman sensation Xavier Henry and you have three legit All-America candidates. 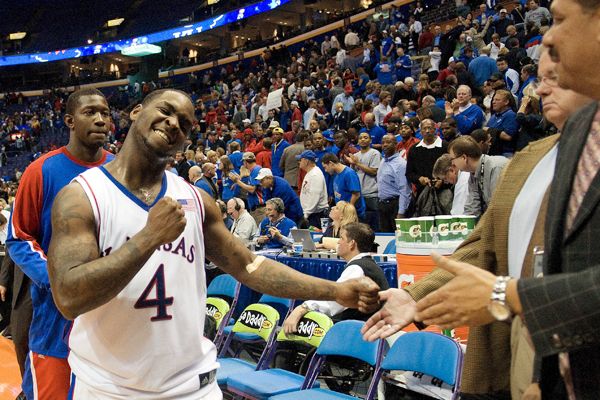 Speaking of freshmen, Kentucky boasts two of the best this season in point guard John Wall and frontcourt player DeMarcus Cousins. Wall has shown incredible poise this season and has a knack for making big plays when it matters most. NBA execs and scouts love Wall’s size (6-3) and speed at the point, and his intangibles are off the charts. Wall has the same qualities as Derrick Rose and Tyreke Evans, two freshman guards who played under John Calipari, and both are budding superstars in the NBA.

Cousins, a 6-11 power forward/center, is a very physical player who has very good back-to-the-basket moves. Cousins doesn’t shy away from contact and is arguably the best rebounder in college basketball.

Kansas and Kentucky also have two very good coaches on the bench. Self coached the Jayhawks to victory in the 2008 NCAA Tournament title game against Memphis. The coach for Memphis that year…John Calipari, now the head man in Kentucky.

So, save yourself the agony and scribble in Kansas and Kentucky all the way to the Final Four and into the final game.