They’ve all heard the unflattering monikers thrown at the direction of the Los Angeles Clippers over the years: Losers, cursed, hard-luck, also-ran, deadbeat and dud. Ron Harper’s infamous “jail” reference to the franchise still resonates in the basketball community.

But Blake Grifin, Eric Gordon, Al Thornton and Rasual Butler are having none of that.

They are “The New Clips on the Block” and they are a ready to change the perception many have about a team that has long been considered the doormats of the residents of Staples Center.

Griffin is the centerpiece of the team’s renewed optimism. He was the team’s top draft pick last June, a title that belonged to Gordon a year ago, which Thornton wore two seasons ago. Butler is a season veteran who have played on winning programs in Miami and New Orleans. 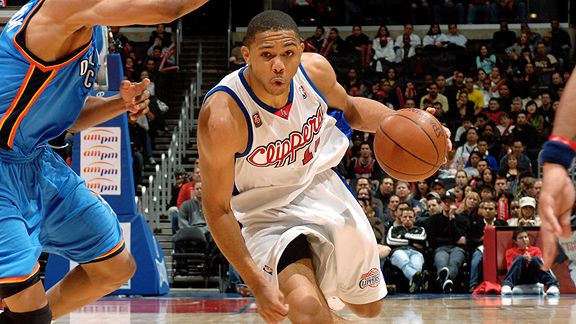 Griffin bolsters an already talented frontcourt that includes center Chris Kaman and forward/center Marcus Camby. The 6-10, 240-pound power forward destroyed the competition in the NBA Summer Pro League in Las Vegas, showing the power, speed and finese that made him the No. 1 overall selection in the draft.

“He’s really strong and athletic. There’s a lot of ways that he can help us,” Gordon said of Griffin, his new teammate and the early favorite to win the 2009-10 rookie of the year. “For me and him, I’m more of a penetrator and he’s able to get to the basket, and maybe I’ll throw some oops to him.”

As for the Griffin-Camby-Kaman logjam in the frontcourt, Gordon said, “As long as they rotate, come in and be productive they should be really good.”

Thornton enters his third year in the league. He raised his scoring average from 12.7 during his rookie season to 16.8 last season, and during this offseason the 6-8 forward out of Florida State worked on his defense.

“Just being more aware; being able to guard guys who are more prepared than some,” Thornton said.

At 30 years of age and entering his eighth season in the NBA, Butler is the “young vet” on the Clippers’ roster. Butler has a reputation for being a sniper, meaning he can hurt the opposition with his long-range shooting, but he also brings a lot of playoff experience from his days with the Heat and Hornets.

“I’m pretty much looked at in this league as a shooter, that’s what I am. I’m gonna bring some outside shooting, be one of those guys that’s threat from distance and try to spread the floor for Chris Kaman, Blake Griffin and Marcus Camby, our post guys, and give Baron Davis some room to operate,” said the 6-8 shooting guard and small forward who is now with his third NBA team.

“I’ve been on teams that made the playoffs so I kinda understand the attitude you need to have to try and put yourself in the best possible position to make the playoffs,” Butler added. “I don’t really look at myself as a veteran; I kind of call myself a young vet. Not really have a lot of miles on my body. I’ve had some opportunities to play in some big moments. I just want to come in and bring some good energy.”