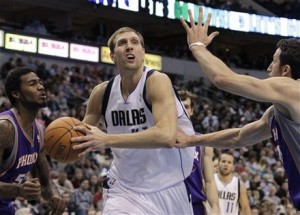 Don’t let that 12-game winning streak and the inflated overall record fool you. The 2010-11 Dallas Mavericks are not that much better than the 2002-03 Mavericks, or the 2006-07 Mavericks, or the 2009-10 Mavericks. The coaches and players may have changed, but the same problems persist: a soft interior defense and a predictable offense.

A few nights ago, the Mavericks were rolling and blitzing the league en route to 12 consecutive victories. That winning streak was snapped recently by the Milwaukee Bucks. The Bucks for crying out loud! And, to make matters worse, the Mavericks lost at home, where they should never lose to an average Eastern Conference team, which the Bucks are at this point.

The Mavs have never developed that killer instinct to be considered a legitimate contender for the NBA title. They didn’t have it in 2006 when they blew a 2-0 lead in the NBA Finals to the Miami Heat, and they certainly never had it when they got thrashed by the Golden State Warriors in the first round of the 2007 playoffs.

Killer instinct starts with defense, and as long as Dirk Nowitzki is the face of the franchise, the perception (whether it is reality or not) is that the Mavs will always be a soft team. No matter who the Mavs insert at center to pair with Dirk, their defense remains suspect. The scouting report on Dallas: rough them up and they will collapse like the Metrodome roof.

For all the wonderful things Nowitzki does on offense, he is a liability on defense. He’s your typical European big man (Pau Gasol is the exception) who prefers to shoot fadeaway jumpers. In an ideal situation, Nowitzki would greatly benefit from becoming the No. 2 star – much like Gasol when he left Memphis to join Kobe Bryant’s Lakers. Nowitzki is more Kevin McHale than Larry Bird, which is not a knock on Dirk. He’s a very good player, but he’s not a No. 1 guy.

Acquiring Tyson Chandler during the offseason puts a Band-Aid on Dallas’ soft-as-tissue persona, but Chandler alone can’t cure the team’s deficiencies. Chandler is a tremendous help defender but he’s not a good one-on-one post defender. He gets pushed around at times and picks up too many silly fouls, which reduces his aggressiveness. Brendan Haywood is an upgrade from Erick Dampier, but Haywood is a backup center at best.

Another major problem that could resurface in the playoffs is Dallas’ vanilla offense. I love Jason Kidd as a point guard, but he is a liability on offense. No matter how many threes he makes during the regular season, I would still dare J-Kidd to make jump shots from beyond the 3-point line. That was the game plan the Spurs implemented during last year’s playoffs and it worked to perfection. When you have J-Kidd on the court, basically the Mavs are playing 4-on-5 on offense.

Caron Butler was a nice addition, but he is injury prone. Essentially, he replaced Josh Howard in the lineup so Butler is not a true upgrade. The other major acquisition, Shawn Marion, has seen his better days. The Matrix relied on his athleticism for much of his career, and now that he’s a shell of himself he doesn’t impact the game like he once did.

Right now the Mavericks are rolling, but don’t get your hopes up.