There is no doubt that John Stockton is a Hall-of-Fame player. But was he the best point guard ever? That is debatable.

If you based everything on regular statistics, then Stockton has to be at the top of list because he retired with the most assists (15,806) and steals (3,265) in NBA history.

However, playoff performances are the barometer for true greatness. When you include that in the debate, then Stockton would take a backseat to Magic Johnson, Isiah Thomas and Oscar Robertson. Johnson won five NBA championships with the L.A. Lakers, Thomas won two with the Detroit Pistons and The Big O won a title late in his career with the Milwaukee Bucks. Stockton was 0-2 in the NBA Finals with the Utah Jazz. 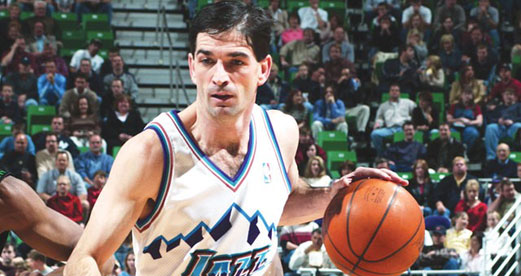 The only thing missing in the Hall-of-Fame basketball career of Utah Jazz point guard John Stockton is an NBA championship ring.

Stockton had an opportunity to put his imprint in the game of basketball, but was unable to seize the moment. He struggled to break loose from Ron Harper, whose 6-foot-6 frame really bothered the 6-0 Stockton during the 1997 Finals and the ’98 Finals. In fact, the length of the Bulls squad bothered Stockton, period. All those bounce passes off pick-and-rolls with basketball BFF Karl Malone were snuffed by the Michael Jordan, Scottie Pippen and Harper.

And in the waning moments of the ’98 Finals, Stockton had a chance to upstage Jordan when the Jazz had the final possession after Jordan hit his famous push-off jumper over Byron Russell at the top of the key. But Stockton missed at the buzzer, and Jordan lifted six fingers in the air to celebrate the Bulls’ six dynastic titles during the 1990s.

That pretty much will be the overwhelming sentiment and the harsh reality Stockton will face for the rest of his life. It is the same cruel fate dealt to NBA greats such as Malone, Charles Barkley, Patrick Ewing, Reggie Miller, Dominique Wilkins and George Gervin.

Stockton will always have that big void in his resume. It’s the “Dan Marino Syndrome.” Marino owned all those NFL passing records but was never considered the best of the all time because he was never part of a Super Bowl championship team. Joe Montana is considered by many as the best of all time because he won four Super Bowls during his career.

The fact of the matter is, the number of championships won is the ultimate tie-breaker when it comes to best-in-the-biz arguments. It’s the reason why we rank Jordan ahead of Magic, Magic ahead of Larry Bird, and why the NBA Finals most valuable player is named after 11-time champion Bill Russell instead of six-time champ Kareem Abdul-Jabbar and two-time champ Wilt Chamberlain.

Those two losses in the NBA Finals will unfortunately define Stockton’s legacy.

When the original Dream Team was being assemble to compete in the 1992 Barcelona Olympics, the selection committee chose Stockton over Thomas. It wasn’t Stockton’s fault that he was picked to be Magic Johnson’s backup, but the very political deliberation didn’t sit well with Thomas.

During a regular season game between Detroit and Utah in 1992, Thomas lit up Stockton for 40 points in a very one-sided matchup. Now, it probably mattered very little since Jordan and Pippen privately put the word out to the USA Basketball committee that they refuse to play with a Motor City Bad Boy such as Thomas, forcing the committee to play it safe and opting for Stockton.