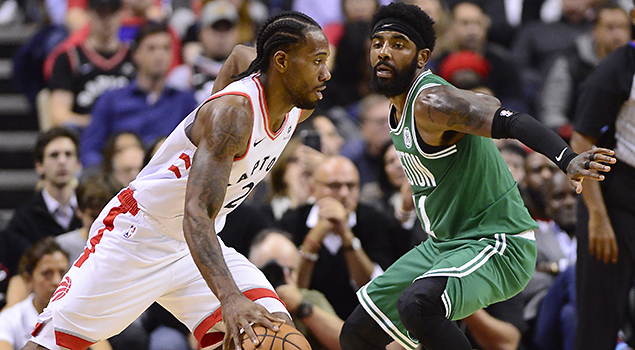 Kawhi Leonard’s Raptors and Kyrie Irving’s Celtics will compete for top spot in the East. (AP)

When LeBron James left The Land and took his talents to Hollywood to play with the Los Angeles Lakers, the Eastern Conference finds itself in virgin territory. Teams from the East are finally free from the chokehold King James has put on the conference the last eight years.

The floodgates are wide open and the team is breathing the biggest sigh of relief has to be the Toronto Raptors. The Raps have had their hearts broken by LeBron in each of the last three postseasons. And last season was arguably the most painful of them all as LeBron’s Cleveland Cavaliers ended the Raptors’ historic season – a year in which they owned the East’s best record at 59-23 – with an embarrassing 4-0 sweep.

Now that The King has moved West, there will be a new king of the East and the West just got even tougher – unless you’re the Golden State Warriors.

OneManFastBreak.net predicts the eight playoff teams in the East for the 2018-19 season.

1-Toronto Raptors – General manager Masai Ujiri made a couple of big moves this offseason. First, he fired the reigning Coach of Year Dwane Casey and elevated assistant Nick Nurse to head coach. The second big move Ujiri made was trading All-Star DeMar DeRozan to the San Antonio Spurs for All-Star forward and former NBA Defensive Player of the Year Kawhi Leonard. The move was definitely an upgrade as Leonard brings toughest to a Raptors team that at times plays a bit soft. The Kawhi addition should only make a 59-win team only better. The Raptors could end up with the best regular-season record, but it doesn’t mean they will represent the East in the NBA Finals because the team right below might be more battle tested. Prediction: 60-22

2-Boston Celtics – Speaking of that battle-tested team …. Brad Stevens showed why he’s the best coach in the NBA by taking a patchwork Celtics roster to the conference finals and got within one win of reaching the NBA Finals despite losing Gordon Hayward minutes into the season and having Kyrie Irving for only 60 games. Stevens will have his roster intact for this season, with another year under the belts of young studs Jaylen Brown and Jayson Tatum. Boston has one of the best benches in the league, a scrappy unit that includes Terry Rozier, Marcus Smart, Aron Baynes, and Marcus Morris. Prediction: 58-24

3-Philadelphia 76ers – The Sixers will go as far as Ben Simmons and Joel Embiid will take them. The duo got the young Sixers to the conference semifinals before getting schooled by the Celtics. Embiid is predicting an MVP season, while Simmons looks to build off his Rookie of the Year season. The big question for Philly is solving the Markelle Fultz puzzle. His well-chronicled shooting woes aside, the 2017 No. 1 overall pick seems like a bad fit in Philly. He is struggling to find his shot within the offense and his lack of outside shooting restricts what the Sixers can do when he’s on the court with Simmons and Embiid. Prediction: 55-27

4-Milwaukee Bucks – New head coach Mike Budenholzer’s first order of business is to find second and third option to take some pressure off his superstar, Giannis Antetokounmpo, who made second team All-NBA last year. If the Bucks can get more production from Eric Bledsoe and Khris Middleton, the Bucks could be in the hunt for one of the top four spots in the conference. Prediction: 49-33

5-Indiana Pacers – The Pacers grew a ton after their epic seven-game playoff series against LeBron’s Cavs. Victor Olapido is an emerging star and coach Nate McMillan has some nice supporting pieces to work with in Myles Turner, Bojan Bogdanovic, Darren Collison and Domantas Sabonis. The acquisition of Tyreke Evans didn’t make headlines offseason, but it’s a subtle but smart move that could pay off in the long run. Prediction: 48-34

6-Detroit Pistons – A full training camp and preseason should help Blake Griffin get more comfortable in Detroit. If Griffin can return to his all-star form, he and center Andre Drummond form arguably the best center-power forward tandem in the East. Dwane Casey takes over a squad that underachieved under Stan Van Gundy. Van Gundy’s heavy handed approach didn’t work, so the Pistons are hoping Casey can connect better with players, especially Griffin and Reggie Jackson. Prediction: 46-36

7-Miami Heat – The Heat are good enough to make the playoffs, but not enough to make a major dent in the East. They have a borderline star in Goran Dragic, but he’s not good enough to carry the team on his back. For the Heat to be elite, center Hassan Whiteside has to step up and be the dominant force he was pegged to be when the team signed him to a $98 million deal. Prediction: 42-40

8-Charlotte Hornets – This is a big year for point guard Kemba Walker. The Hornets have not locked him up to a long-term deal, waiting to see if he’s worth the money. Walker will be motivated to show Michael Jordan and the Hornets brass that he is a franchise player and should get a max deal. Prediction: 41-41