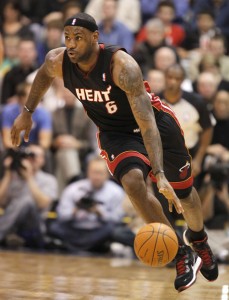 LeBron James is averaging more than 30 points per game in the 2012 NBA playoffs. (GETTY IMAGES)

With all due respect to Oklahoma City’s Kevin Durant, LeBron James is the real MVP of the 2012 postseason.

James proved it with 45 points and 15 rebounds in Game 6 of the epic Miami-Boston series to force a deciding Game 7. Surprisingly, he made 19 of 26 field goals and a lot of them were jumpshots, not dunks or layups. James was making a lot of midrange shots.

He looked like the same LeBron who played for the Cavaliers when he carried Cleveland against the Detroit Pistons in 2007. To refresh people’s memories, he scored 25 of Cleveland’s final 29 points as the Cavs moved to within a game of the NBA Finals where they lost to the San Antonio Spurs.

“In an environment like this, you want to have a big game,” James said after the game. “I wanted to be there for my teammates, no matter what was going on throughout the course of the game. This was a gutcheck for us, and it’s good to see we were able to bounce back after that loss, after that Game 5 loss at home.”

James averaged 33.6 points per game and 11 rebounds per game in the series against the Celtics. Saturday night’s game was revenge to a certain degree for LeBron. While with the Cavs the Celtics beat Cleveland two times in the playoffs. In the Eastern Conference finals in 2008 and in the conference semifinals in 2010.

He has played like a man on a mission all throughout the playoffs, as he is averaging 30.8 points, 9.5 rebounds, and 5.1 assists per game. With his third regular-season MVP this season, it looks like James wants another piece of hardware — a Finals MVP. And now comes the real test for James and the Heat: Kevin Durant and the Thunder.

James will have to be at his best on the offensive and defensive ends of the court in order to get that elusive NBA title.

Darren Jacks is a contributor to OneManFastBreak.net. Send him an email at: djroxalot@hotmail.com