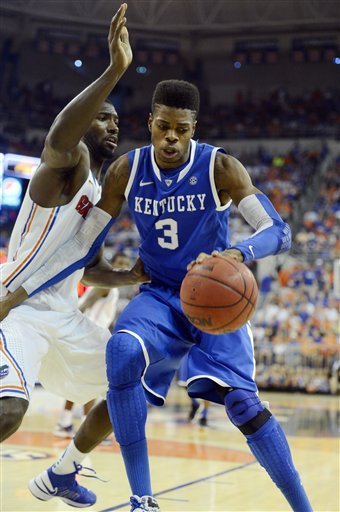 Kentucky freshman Nerlens Noel has been declared out for the season after tearing his ACL. (ASSOCIATED PRESS)

Kentucky freshman forward Nerlens Noel was declared out for the rest of the college basketball season on Wednesday with a torn ligament in his left knee. Noel tore his ACL on Tuesday night when Kentucky lost at Florida. An MRI revealed the injury, and the 6-foot-10 forward will have surgery in the next two or three weeks.

Noel’s injury deals a serious postseason blow for the defending national champions, and some basketball experts are already predicting the doom-and-gloom scenario in which Noel’s draft stock — he’s expected to leave school after this season and enter the NBA draft — will plummet.

To borrow a phrase from ESPN analyst Lee Corso, “not so fast, my friend!”

Any ACL tear is devastating, but it is not career-ending. Noel is 18 years of age, so time is on his side. The projected recovery period is six to eight months, which means Noel will miss all the pre-draft workouts and evaluations. But this shouldn’t exclude him from any of the draft lottery spots. Remember Kenyon Martin? Martin was the consensus player of the year in 2000 and had he not broke his leg during a conference tournament his Cincinnati Bearcats may have won the national title. Despite the serious leg injury, Martin STILL went No. 1 overall in the draft and was selected by the New Jersey Nets.

Noel, who leads the nation in blocked shots at 4.5 per game, took a positive approach to the diagnosis, posting on Twitter, ”Minor setback for a MAJOR comeback! I love you all and can’t thank y’all enough for the prayers.”

Noel was hurt with 8 minutes left in the Wildcats’ 69-52 loss to the seventh-ranked Gators. He ran into the basket support after blocking a layup from behind. Noel landed awkwardly, dropped to the floor and started screaming while clutching his knee. Noel had eight points, six rebounds and three blocks before the injury.

”I’ve been coaching for 22 years and this is the first injury we’ve had of this kind during the season, which makes it even more devastating,” Kentucky coach John Calipari said in a statement.

”I met with Nerlens earlier today. The meeting was really positive, and I loved his attitude. The way he is already dealing with this injury lets me know that he is going to come back stronger than ever. … Obviously this is not a career-ending injury and it’s one that athletes bounce back from all the time.”

Calipari is absolutely right about Noel’s recovery. He’ll definitely bounce back from this setback, and NBA teams are always looking for a good big man so his draft stock shouldn’t be affected at all. The only team hurt by Noel’s injury is Kentucky.

With Noel out, 7-footer Willie Cauley-Stein now must man the post for Kentucky after spending most of the season as Noel’s backup. Cauley-Stein missed four games last month after having a procedure on his left knee, an absence that meant even more minutes for Noel.

The Everett, Mass., native clearly relished the extra work, which gave him a chance to display an array of skills. Besides his shot-blocking prowess, Noel was averaging 10.6 points, 9.5 rebounds and 2.1 steals per game, with the latter two statistics both ranking 26th nationally.