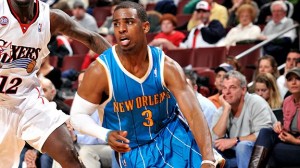 There are now several published reports that point guard Chris Paul wants out of New Orleans and lists the Orlando Magic as his No. destination.

This has LeBron James’ fingerprints all over this sudden trade demand from the NBA’s best point guard. James and Paul are very good friends. In fact, the week of LeBron’s “Decision” Paul was at his basketball camp in Akron, Ohio. James probably told Paul what his intentions were and planted the seed on this whole “super team” idea.

Paul dropped hints last month during Carmelo Anthony’s wedding that he would love to play with other superstars. He mentioned playing in New York with Amare Stoudemire and possibly Anthony (if he decides to leave Denver), and he also mentioned Dallas, Portland and Orlando.

Forming super teams are becoming the latest trend in the NBA, much like the headbands and arm sleeves. What every happened to being an original instead of a copycat? Michael Jordan certainly disagreed with LeBron’s decision to leave Cleveland to be with two other All-Stars in South Beach. Magic Johnson and Charles Barkley couldn’t understand why a reigning MVP would smudge his star like that and hop on someone else’s bandwagon. That was complete foreign to super studs in the 1980s.

With James, Dwyane Wade and Chris Bosh joining forces in Miami, Paul looked at his own situation in New Orleans and got star envy. I guess David West and Emeka Okafor won’t suffice at this point.

That’s where the Orlando Magic comes in. Paul sees Dwight Howard and his mouth begins to salivate just thinking about all those alley-oop passes he can serve up to Blankman. But Orlando already has a point guard, Jameer Nelson, and he just happens to be Blankman’s best friend. Would Blankman toss his good friend under the bus so he could team up with a better PG? Not likely to happen.

The second team on Paul’s wish list is the New York Knicks. Again, Paul would love to run pick-and-rolls all day with Stoudemire, but at some point you have to play defense which is something head coach Mike D’Antoni doesn’t have in his playbook. If D’Antoni, hypothetically, had 100 pages on his playbook, 99 of them would be devoted to offense.

Even if the Knicks somehow convince Paul and Anthony to come to the Big Apple it still wouldn’t guarantee the Knicks a spot in the NBA Finals. Championships are not built overnight (unless you’re the Boston Celtics in 2008, which is somewhat of an anomaly).

Which leads us back to New Orleans.

Paul, who has two years left on his Hornets deal, has been the face of the New Orleans Hornets the day he was drafted into the league. He’s more than just a starting point guard to the people of New Orleans. He’s the ray of hope that lifts spirits of a ravaged community that is still recovering from a devastating hurricane. Losing CP3 would be like losing the Superdome or the French Quarters on Bourbon Street. It would pretty much signal the end of basketball in New Orleans.

The Hornets brass, which includes GM Dell Demps and head head coach Monty Williams, are scheduled to meet with Paul and convince their superstar that the team is doing everything they can to piece together a contender. If the talk goes well, Paul will likely stay in New Orleans. If not, the Hornets better have a Plan B.

I’m hoping CP3 would come to his senses and think better of leaving the franchise that worships him. Bringing a championship to New Orleans would easily trump three or four titles with the Magic.

Paul should call Drew Brees and ask him how great it feels to lift a downtrodden football team all the way to the Super Bowl. Brees won’t have to win another championship in his lifetime. Bringing ONE championship to New Orleans is worth a thousand mardi gras.