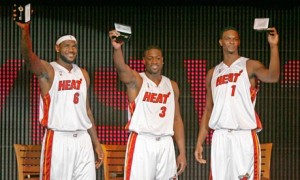 Former NBA coach and current ABC/ESPN TV analyst Jeff Van Gundy was recently quoted in the Miami Herald that the Miami Heat will break the Chicago Bulls’ single-season record of 72 victories and has a legit shot at the L.A. Lakers’ 33-game winning streak that has stood for almost 40 years.

“Only the Lakers have even a remote shot at beating them in a playoff series. They will never lose two games in a row this year,” Van Gundy told Barry Jackson of the Miami Herald. “They have put together a much better roster than anybody could ever have expected. There is now no good way to defend them. They are unguardable. They are indefensible. They are just too good and have added so much shooting and are so versatile that they will score at will.”

Van Gundy added: “And with Erik Spoelstra coaching, they will be in the top three defensive teams in the league, as well. The other 29 teams better hope the lockout gets moved up a year.”

I respect Van Gundy as a head coach and I think he’s one of the best TV analysts working today, but he’s overselling the Heat a little bit. Sure, the Heat now has arguably the two best players in the NBA in their starting lineup, but JVG seems to overlook the fact that Miami’s core group of Dwyane Wade, LeBron James, Chris Bosh, Mike Miller and Zydrunas Ilgauskas have yet to play a meaningful game on the court together and the Heat still has plenty of question marks in the frontcourt.

Miami has a revamped roster for the 2010-11 season and only seven players on the current 20-man roster were there last season. It is extremely difficult to piece together a championship team in one season, and it’s even harder to establish NBA records with a squad that hasn’t been tested.

And who’s going to command the paint for Miami? Pat Riley used to say “No rebounds, no rings.” Besides Bosh, who is going to rebound for the Heat? Miami’s not-so-live crew of Bosh, Ilgauskas, Jamaal Magloire, Udonis Haslem, Juwan Howard and Joel Anthony don’t exactly strike fear in the hearts and minds of opposing teams.

Bosh is a legit NBA All-Star, but he’s more of a soft forward than a power forward. Ilgauskas couldn’t even beat out an old and slow Shaquille O’Neal in Cleveland last season; Haslem may be a gamer but he’s undersized and has logged plenty of playoff miles; Howard is now on his seventh NBA team in 16 years in the Association; and Magloire and Anthony will be lucky to play more than 15 minutes a game.

The Heat may very well feast on Eastern Conference lightweights such as the Pacers, Pistons, Wizards, Sixers, Cavaliers and Knicks, but they still must contend with the Celtics, Magic and Bulls. Then, in the Western Conference, there are eight teams that can knock off Miami on their home courts: Lakers, Thunder, Mavericks, Blazers, Rockets, Nuggets, Jazz and Spurs.

Because of the uncertainty of injuries, long road trips and back-to-back games, there is no way the Heat will defeat the Lakers’ 33-game winning streak. That streak could stand the test of time, much like Joe DiMaggio’s 56-game hit streak. There are just too many hurdles to clear during the course of a regular season for a team to win 33 consecutive games. It’s almost an impossible task.

As for the 72-10 record the Michael Jordan-led 1995-96 Bulls team established, that mark could be within reach but, again, the Heat will have to play near-perfect ball to tie or surpass that standard.

Let’s assume the Heat will blitz through the East, which ain’t much outside of Chicago, Boston and Orlando. The Bulls should give the Heat a stiff challenge so there’s two potential losses there. The Celtics, who will be resting a lot of old legs during the regular season, may win one game from Miami. The Magic will be the bigger test, simply because of Dwight Howard. Miami doesn’t have anyone to contend with Howard one-on-one. We’ll call this a draw, so that gives the Heat five losses in the East.

Then, Miami needs to split with the Lakers, Thunder, Jazz, Mavericks and Nuggets just to stay at 10 losses. That means the Heat will have to sweep the rest of the Western Conference just to tie the record. NO WAY that happens.

So, forget about the 33-game winning streak. The Heat will be lucky to win 20 in a row. Then, there are too many factors to overcome in order to break the Bulls’ 72-10 record.

I’m not sure what Van Gundy was thinking when he said the Heat are “unguardable” and “indefensible.” The Heat could very well be the best team in the East, but they are not a team for the ages.