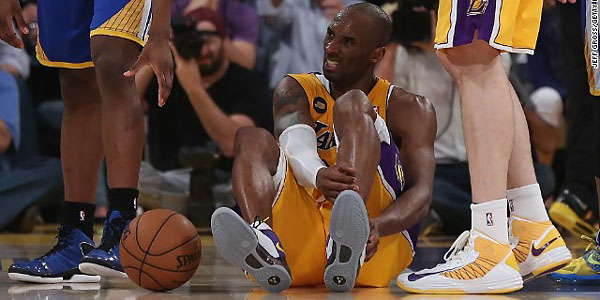 Kobe Bryant grabs the back of his left foot after going down to the ground. (GETTY IMAGES)

I was fortunate enough to witness in person Kobe Bryant’s professional debut in the summer of 1996 at the Long Beach Pyramid. He was 18 at the time and played for the L.A. Lakers’ Summer League squad, along with fellow rookie Derek Fisher. Kobe was clearly the best player on the court that day and no one could stop him.

Seventeen years later, I was at Staples Center Friday night when the Lakers took on the Golden State Warriors. Kobe, even at the age of 34, was still the most dominant player on the court and nobody on the Warriors could stop him.

Bryant has such supreme confidence in his abilities that the word “fear” is not in his vocabulary. That all changed on April 12, 2013.

With the Lakers down 109-107 with a little over three minutes left in the fourth quarter, Bryant took a pass on the left wing and was met by rookie Harrison Barnes. Bryant took one dribble to his left to get by Barnes, a move he has made a million times, and fell to the ground. He immediately grabbed the back of his heel and grimaced. Athletes know when an injury is serious, and Kobe knew this one was bad. After he knocked down two free throws, he limped off the court, dragging his left foot, and went to the locker room. He didn’t return. It would be his final game of the 2013 season.

After the game a very sullen Bryant spoke with reporters and for the first time in his basketball life you could see fear and doubt in his eyes.

This is such BS! All the training and sacrifice just flew out the window with one step that I’ve done millions of times! The frustration is unbearable. The anger is rage. Why the hell did this happen ?!? Makes no damn sense. Now I’m supposed to come back from this and be the same player Or better at 35?!? How in the world am I supposed to do that??
I have NO CLUE. Do I have the consistent will to overcome this thing? Maybe I should break out the rocking chair and reminisce on the career that
was. Maybe this is how my book
ends. Maybe Father Time has defeated me…Then again maybe not! It’s 3:30am, my foot feels like dead weight, my head is spinning from the pain meds and I’m wide awake. Forgive my Venting but what’s the purpose of social media if I won’t bring it to you Real No Image?? Feels good to vent, let it out. To feel as if THIS is the WORST thing EVER! Because After ALL the venting, a real perspective sets in. There are far greater issues/challenges in the world then a torn achilles. Stop feeling sorry for yourself, find the silver lining and get to work with the same belief, same drive and same conviction as ever.
One day, the beginning of a new career journey will commence. Today is NOT that day.
“If you see me in a fight with a bear, prey for the bear”. Ive always loved that quote. Thats “mamba mentality” we don’t quit, we don’t cower, we don’t run. We endure and conquer.
I know it’s a long post but I’m Facebook Venting LOL. Maybe now I can actually get some sleep and be excited for surgery tomorrow. First step of a new challenge.
Guess I will be Coach Vino the rest of this season. I have faith in my teammates. They will come thru.
Thank you for all your prayers and support. Much Love Always.
Mamba Out

You can sense the frustration and the sadness in Kobe’s Facebook message. All the emotions were pouring in from anger to frustration to grief. Anyone who has gone through an Achilles tear has had the same feeling.

I had the same feeling when I tore my left Achilles’ tendon in 2000 when I was 29 years old. I was playing basketball at Elysian Park and, when I made a quick turn to run back on defense, my left foot gave out. It felt like someone kicked me on the back my foot. I went to the sideline, tried to stretch it out thinking it could just be an ankle sprain but couldn’t put any weight on it. I drove him and iced my heel.

The next morning, I literally dragged my foot to the hospital. A doctor told me I completely tore my Achilles and there were two options: 1) let it heal by itself but there’s no guarantee of recovery, or 2) have surgery and go through a nine-month rehab process. I decided to have surgery that same day.

My foot was placed in a hard cast and for three months I was on crutches. Vicodin became my best friend. Once the cast was removed, I wore I walking boot for another three months. Then, for another three months, I had to learn how to walk again. I rehabbed four days a week, pushing my foot to its limits because the doctors say the harder you push the more you’ll regain the flexibility in your tendon.

Two years later, I was back playing basketball because I didn’t want the injury to get the best of me. But even though I was able to run, jump, shoot, and cut my foot was not the same. I couldn’t spring up for rebounds or jump multiple times. I couldn’t explode to the basket like before and my reaction time was much slower.

Basketball Prospectus writer Kevin Pelton wrote a great piece on Achilles injuries in the NBA and from his research of the 13 players he found with ruptured Achilles’ tendons in the last two decades four never played in the NBA again. That list included Detroit Pistons great Isiah Thomas, who retired at 32 following a ruptured Achilles in 1994. New York Knicks star Patrick Ewing tore his Achilles in the 1999 season at age 36, and even though he played three more years he was basically a shell of his former self.

Clippers guard Chauncey Billups suffered an Achilles tear in 2012, and he is now struggling to get back on the court. Elton Brand had All-Star credentials before he ripped his Achilles’ tendon in 2007. Brand is currently a reserve forward for the Dallas Mavericks.

Atlanta Hawks great Dominique Wilkins is the lone exception to the Achilles curse. Wilkins made two All-Star teams after a ruptured Achilles suffered at 32 and played until age 39.

There is no doubt Kobe will rehab like crazy to return to the court. He doesn’t want to go out like this, limping off the court and powerless. But Achilles injuries are devastating to athletes who rely a lot on explosion, running, and jumping. Kobe may be able to come back from an Achilles tear but he’ll never completely regain the spring in his step. He’ll have to alter his game to the point where he’ll do almost all his work from the free throw line down. He’ll have a hard time beating guys off the dribble and he’ll certainly struggle to dunk a ball.

Kobe will still be an effective player because his game is more than just throwing down dunks or making circus shots. He has a great midrange shot and he has multiple post-up moves. He’ll need to be more selective and beat defenders with his mind more than his body. Because of his physical limitations, Kobe Bryant can’t be the Black Mamba anymore.