As the Summit in South Beach continues to manifest various scenarios and reports on where LeBron James and Chris Bosh are headed next season, one thing is 99.9% evident: Dwyane Wade will re-sign with the Miami Heat.

Wade has publicly said on numerous occasions that he doesn’t want to leave Miami, and all signs point to a contract extension between the Heat and the 2008-09 NBA scoring champion.

“I want to be in Miami,” Wade recently told the Miami Herald.

Once the Heat were eliminated from the 2010 NBA playoffs, Wade made it clear to team president Pat Riley and owner Micky Arison that he needs more help and  a roster upgrade was necessary in order for the Heat to be able to compete for another championship. 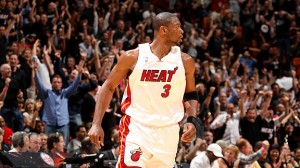 Well, apparently Wade has seen enough “things being done and accomplished” that he seems to be on the verge of re-signing with the only NBA franchise he has called home since he came to the league in 2003.

The Heat are actively pursuing Wade’s 2003 classmates in James and Bosh, and other big-name free agents, with D-Wade leading the recruiting. All three are very close friends, and they’ve all broached the subject of possibly playing on the same team to increase their chances of winning a title.

Wade already has a championship ring, but James and Bosh are thirsting for their first. James has become increasing frustrated with his playoff disappointments with the Cavaliers while Bosh has been an afterthought in Toronto. Having Wade, James and Bosh on one roster doesn’t guarantee a championship, but it definitely affords the Heat an enormous amount of star power and could challenge the Los Angeles Lakers in terms of popularity.

Bosh is the key to the whole deal. He is the third wheel in this star-studded triangle. Wade and James should get their maximum deals so that leaves Bosh with a little less than what he’s asking for.

The Heat have had their eye on Bosh since 2003, and was reportedly ready to make the former Georgia Tech standout their first-round selection until Toronto snagged him at No. 4 and the Heat “settled” for Wade at No. 5.

Miami is expected to dump 10 contracts this summer, giving the team plenty of cap space to sign two maximum contracts and possibly a third All-Star if it can somehow unload Michael Beasley’s contract to another sucker… I mean another team.

Is South Beach big enough to house LeBron and D-Wade?

“It’s funny to hear scenarios, for people to tell you that you know and you thought about it,” Wade told the Associated Press. “In New York, they kind of made me say, tried to make me say that I have thought about it or I have talked to LeBron. It’s amazing to me that people are inside my head that way. I don’t know.”

The Heat have somewhat of an advantage over other teams when it comes to dealing with this year’s free-agent drama because Riley has been through this taxing process before.

In 1996, he managed to convince Alonzo Mourning to leave the hive in Charlotte and come to South Beach and become the honorary Mayor of Miami. OK, maybe Mourning didn’t become the mayor but he at least pocketed a cool $100 million contract and the keys to the Heat franchise.

Then, in 2004, Riley pulled off one of the biggest trades in NBA history when he acquired Shaquille O’Neal from the Los Angeles Lakers for Lamar Odom, Caron Butler, Brian Grant and a first-round pick.

After bringing the Big Fella to South Beach, Riley reworked the team into a championship contender for the next two seasons, picking up veterans Gary Payton and Mourning, and trading for Antoine Walker, Jason Williams and James Posey. The final piece was Riley himself, pushing aside Stan Van Gundy and coaching the Heat to the 2006 NBA title.

Does Riley have another blockbuster move left in him?

We shall see. The only thing for sure is that Wade will be playing with another All-Star (or two) in Miami when the 2009-10 season arrives.