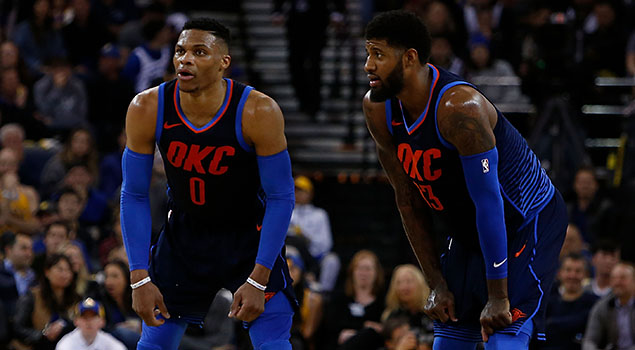 You can take Paul George’s name off the NBA free-agent tracker list.

At 11:51 pm ET on June 30, about nine minutes before the official start of the July 1 NBA free agency period, an Oklahoma City Thunder fan with the Twitter handle @GabeIkard posted a video of Paul George announcing his decision to stay in Oklahoma City. “If y’all didn’t quite get it. Let me say it again. I’m here to stay,” George told fans during a summer party hosted by Thunder teammate Russell Westbrook in Oklahoma City that was also attended by team officials. If you connect the dots, it was probably the worst-kept secret in the league. Westbrook reportedly left his Hawaii vacation to fly back to Oklahoma City to host a shindig and invited his buddy PG13. It would have been one heck of a letdown if PG ended up telling everyone at the party that he was going to L.A. Fortunately for Westbrook and OKC fans, Paul George is staying and the party really got started.

You heard it here first. pic.twitter.com/jN6gBn6j1Z

At 12:18 am ET, ESPN’s Adrian Wojnarowski confirmed the announcement and reported that the All-Star forward agreed to re-sign with the small-market Thunder on a four-year, $137 million deal. The contract can’t officially be signed until the NBA’s moratorium period ends on July 6. The deal includes a player option for the fourth season.

“This is a guy who had one of the worst injuries we’ve all seen,” TNT reporter David Aldridge said of George, who suffered a broken leg in 2014 during an exhibition game for Team USA. “The opportunity for him to stay at some place who took a chance on him, knowing that his heart was probably thinking about L.A., that meant a lot to him. He felt comfortable playing with Russell Westbrook for a long time.”

George’s deal aligns with Westbrook’s five-year, $205 million megadeal that he signed last year. With both superstars locked up long-term, the Thunder are in excellent position to put forward a plan that will keep them as title contenders in the ultra-competitive Western Conference.

“[OKC GM] Sam Presti and his staff, and [head coach] Bill Donovan, got him to commit to four years. You got him and Russ locked up for the remainder of their prime. And you know what nucleus you’re building. That means you can make thoughtful and mindful decisions,” former Cavaliers general manager David Griffin said on NBA TV. “You’re not chasing this championship, and now what. They are in a much better team-building situation.”

The George news was a big blow to the Magic Johnson, Rob Pelinka and the Los Angeles Lakers’ rebuilding plan. It was widely expected that George was going to sign with the Lakers and bring in other free agents — aka LeBron James and Kawhi Leonard — with him to L.A. That plan has been torpedoed.