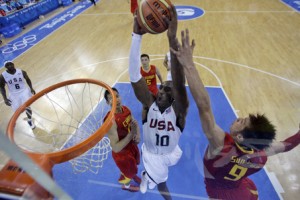 The sport of basketball was the biggest winner in the game between the United States and China.

Many have suspected that the game, a 131-70 blowout in favor of the much deeper and talented U.S. squad, was witness by billions. That may be an exageration but the impact of the game will be felt in the coming years similar to what the 1992 Dream Team did to the explosion of basketball in Europe.

China is not a basketball power. At least not yet.

The Chinese Olympians, despite the presence of six-time NBA all-star center Yao Ming, was overmatched against the superior athletic talents of Team USA. China has the size to match the U.S. and other countries in the interior. It has Yao Ming (7-6), Yi Jianlian (6-11) and Wang Zhi Zhi (7-0). However, China’s depth in the frontcourt heavily outweighs its skilled perimeter players.

Sun Yue, drafted by the Lakers in the second round last June, is probably China’s best backcourt player. But you won’t mistaken Yue for Kobe Bryant.

Yao may be the face of the country’s burgeoning love for the sport but Kobe Bryant is the model for which the majority of the young Chinese players are going to pattern their game. Kobe’s jersey is the top-selling NBA jersey in China. He’s the player that drew the loudest ovation during the opening ceremonies. He’s the guy mobbed by fans when he entered the arena.

When the 2008 Olympics began, the NBA’s popularity in China was already in the millions. Now, the league and the sport just got bigger. A billion times bigger.