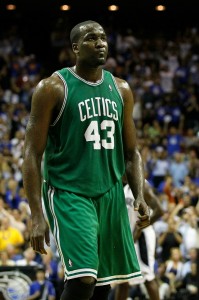 Celtics center Kendrick Perkins is a hard-nosed defender who has earned a reputation for being tough on referees. (NBAE/GETTY IMAGES)

Boston Celtics coach Doc Rivers says Kendrick Perkins is one of the nicest people you will ever meet. So, why does this mild-mannered guy off the court keep getting whistled for technical fouls?

“I’m not gonna answer that. I’ll let you guys [the reporters] answer that,” Rivers said after Game 5 of the 2010 Eastern Conference finals, a game in which the Celtics’ starting center was ejected in the first half after receiving two technical fouls, which at the time gave him a league-high seven for the playoffs – an automatic one-game suspension.

After reviewing the incident, the NBA league office released a statement on Thursday and decided to rescinded the second technical foul on Perkins, clearing him to play in Game 6. However, Perkins is not out of the woods yet because one more technical and he’s off to the penalty box.

Perkins was called for technical early in the first half after he bumped Magic backup center Marcin Gortat with his elbow while trying to help up teammate Paul Pierce. Then, with under a minute left in the second quarter, Perkins was called for a second technical after he argued a foul call. Even though Perkins walked away from referee Eddie Rush, Rush still served him the technical and Perkins had to leave the game.

“Didn’t think he deserved either one, but he got them. It happens,” Rivers argued. “It’s amazing we talk about this before the game, the double technical thing. Perk was bending down picking the ball up and got a tech for being around. I don’t know how he got that tech. The other tech, you know, when you argue it was awful quick but they called it. I did think that Eddie Rush realized once he called it he couldn’t rescind the tech because he had forgotten he had given him the other one. I don’t think Perk wouldn’t have gotten that one. But that happens.”

For the past three seasons, the Celtics have developed a reputation for being very tough on referees, seemingly challenging every call, and the bad perception grew even stronger this season with the addition of Rasheed Wallace, who holds the NBA record for most technicals in one season (41).

In this year’s playoffs alone, Boston has been whistled for 20 technical fouls and Perkins is the clubhouse leader with six.

“But we put ourselves in that position,” Rivers said. “Like I told our guys, you can’t make any excuses. If they don’t stand, then somebody else has to step forward and that’s just the way it is.”

Magic coach Stan Van Gundy had nothing to say about Perkins’ technicals, but he did manage to bring up the two questionable flagrant foul calls on two of his players.