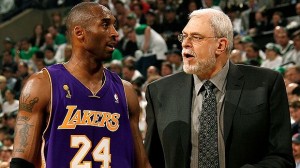 Kobe Bryant and Phil Jackson were not happy with the way Game 4 was officiated. (NBAE/GETTY IMAGES)

Nuggets Coach George Karl reasoned his players “could not get a feel for the whistle” during the loss in Game 3. After his Lakers lost in Game 4, it was Phil Jackson’s turn to take the mic to voice his displeasure. He was quick to point out the 49-35 free-throw disparity and the 31-24 personal foul differential, both in favor of the Nuggets. The Lakers starting frontcourt of Andrew Bynum (5), Pau Gasol (4) and Trevor Ariza (5) combined for 14 personal fouls. Add Lamar Odom’s (5) and Luke Walton’s (6) fouls to the mix and it’s a 25-12 disadvantage for the Lakers’ big men.

The usually cool and calm Zen Master took out his frustration on Los Angeles Times columnist T.J. Simers. When Simers brought up the subject of the Lakers not competing all the time, Jackson paused and replied: “I’ll explain it to you in deep terms, okay.

“Basketball is a game where the aggressor gets the advantage. And tonight, we didn’t know what a foul was and what wasn’t a foul,” Jackson explained. “The start of the ballgame, we got guys knocked around going to the basket and they said we’re gonna let these things go. And by the end of the ballgame, little fouls were being called all over the place. Forty-nine foul shots in a sequence of a game like that. That’s not how we wanted to play and that’s not what we wanted to do in a game.”

When Simers tried to interrupt Jackson, the Lakers coach told Simers, “Just be quiet while you’re standing there. You asked me a question and I’ll give you the answer, alright.”

Jackson continued, “So, as the momentum changes in a ballgame like that, you’re always on your heels because guys are now in foul trouble. Then you’re not the aggressor anymore. Then you’re the guy that’s defensively playing the game. And that’s what I don’t like.”

The thorough analysis from Jackson is sure sign that the Lakers coach is clearly irritated by what he witnessed in Game 4. And he’s also clearly irritated with Simers, who followed up his initial question by asking Jackson, “So, are you saying it’s the referees and not your team’s inability to compete all the time?” To which Jackson responded by saying, “No. I don’t think I said that. I think you’re trying to put words in my mouth and I’m not gonna let you do that.”

In defense of Simers, Jackson was clearly criticizing the refs and placed much of the blame on the officials without calling them out by name. The Zen Master will surely get a call from Stu Jackson and could be hit with a costly fine, which is fine by Jackson. He basically used the post-game news conference as a platform to make his argument.

Jackson pointed out a sequence of events late in the fourth quarter that helped the Nuggets pull away from the Lakers. He said Walton went across the lane and got hit in the throat by Nene, and no foul was called. When Walton complained to the officials, he was whistled for three fouls in a row that awarded Carmelo Anthony six consecutive free throws.

“The referee gave him (Walton) a technical and subsequently gave him three consecutive fouls,” Jackson said. “That kind of disparity we don’t like in ballgames. That’s not equal refereeing, and those are the things that changes the course of games and we don’t like that. We want the game fair and evenly played.”

One unfair play that was completely missed by the referees was the obvious tripping foul on Nuggets forward Dahntay Jones that got Kobe Bryant steaming. When Bryant was asked about it, he sarcastically said, “I fell on my face for no reason. I’m a klutz.”

Jackson called Jones’ alleged dirty play “unacceptable defense” and “unsportsmanlike basketball.” He also said it’s not the first time Jones had done such a thing during the series.

But the noncalls was just part of the Lakers’ woes in Game 4. After spending an enormous amount of energy in winning the previous game, the Lakers appeared to be tired on Monday and the numbers supported that as the Nuggets outrebounded them, 58-40, a clear indication the visiting team was suffering from fatigue.

“We just didn’t get to the ball. Their offensive rebounding disparity was quite obvious. A lot of it was breakdowns so there’s some action to create situations where our bigs needed to help, so they’re weren’t ready (to rebound),” Jackson said on how the Nuggets collected 20 offensive rebounds to the Lakers’ 9.

Bryant had a more unsubtle response to the Lakers’ rebounding woes. “They just kicked our ass,” Bryant said. “They whupped us.”