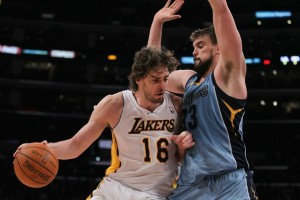 Lakers forward-center Pau Gasol is defended by his brother, Marc Gasol, during a Lakers-Grizzlies game at Staples Center in Los Angeles. (GETTY IMAGES)

The Grizzlies came into Staples Center and embarrassed the defending NBA champions 104-85. The Lakers have now lost three of their last four home games, and the one win was a four-point struggle against the lowly 76ers. Is there trouble in L.A.?

“We didn’t execute well, and defensively we were poor,” Kobe Bryant told reporters on Sunday night after the loss, the Lakers’ 11th of the season. “We’ve just got to come out focused and ready to play. It’s tough when you have to try to regenerate that energy every single night. It starts individually. You have to look at yourself and try to find things to get you going. Right now we can’t beat anybody, but we’ll be fine.”

Phil Jackson agreed with Kobe about the lack of focus, but the Lakers head man also got very specific during his postgame press conference regarding the team’s struggles offensively.

“It’s a matter of focus. We didn’t use our strengths, which is our inside players,” Jackson said. “Pau gets nine shots during the course of a game, some of it is his own responsibility, but we didn’t use that focus that we have in the ballgame.”

Jackson continued, “We started off the game with Pau scoring six out of our eight points, but he didn’t score again in the half.  He’s too good of a player for a game like that.”

Translation, Jackson wants Kobe and Co. to FOCUS on getting the ball inside to Pau Gasol and, to an extent, Andrew Bynum. The Lakers have the best low-post players in the league the Zen Master wants his team to initiate their triangle offense through their big men and play the game inside-out, something Kobe and Co. failed to do against the Grizzlies.

“As a result, we get behind early in the third quarter on some stupid plays. You know, poor passing, poor transition defense,” Jackson explained, “and Kobe has to screw up the game and start energizing the team by going one-on-one and takes the rest of the guys out. As a consequence, that did bring us back in and it did gives us a little run and we did get the game back a little bit, but we couldn’t sustain it. And we just went right back and made the same mistakes again.”

Gasol is not really an in-your-face-demand-the-ball kind of guy, so Jackson is basically acting as his mouth piece in this case. Remember the old Shaquille O’Neal line of “feeding the big dog.” Well, the Lakers need to feed their Spaniard if they want him to remain hungry for a third consecutive NBA title.