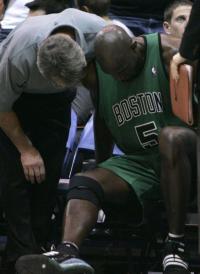 The Boston Celtics are not optimistic about Kevin Garnett's injured knee.

When Paul Pierce was asked which team was the toughest to eliminate in the Celtics’ road to winning their 17th championship, he said, without any hesitation, “Cleveland.”

The Cavaliers pushed the Celtics to seven grueling games in last season’s Eastern Conference semifinals, and when the series was over, the Celtics and pretty much every team in the East said that if Cavaliers management provides LeBron James another all-star player to play with, look out!

When Mo Williams joined Cleveland this season, the Cavs soared to the best record in franchise history and claimed home-court advantage throughout the NBA playoffs.

News of Kevin Garnett to likely to miss the entire playoffs was so devasting that Boston GM Danny Ainge suffered a mild heart attack.  Garnett was tabbed very, very questionable by Coach Doc Rivers after watching KG struggle in practice. Though Boston will not be the same without its quarterback on defense, the Celtics are still the champs and they still have two studs in Pierce and Ray Allen.

Orlando did not finish well and is still vastly untested in the playoffs. As good as Dwight Howard has been during the regular season, there are still doubts about his ability to consistently carry the Magic on his broad shoulders when it matters most. He still lacks a killer instinct. He’s just too nice. And if Orlando gets in any type of trouble, it will be interesting to watch whether Coach Stan Van Gundy pushes the panic button.

OneManFastbreak.net analyzes and predicts the winners of the Eastern Conference playoffs:

(1) Cleveland Cavaliers vs. (8) Detroit Pistons – In a rematch of the 2007 conference finals, this should be a one-sided affair. Cleveland will not overlook Detroit. CAVALIERS IN 4.

(2) Boston Celtics vs. (7) Chicago Bulls – The Bulls will make it close but the Celtics have enough pride to avoid getting bounced in the first round. CELTICS IN 5.

(3) Orlando Magic vs. (6) Philadelphia 76ers – Orlando swept the Sixers during the regular season and there is no reason why the Magic can’t do the same in the playoffs. MAGIC IN 4.

(4) Atlanta Hawks vs. (5) Miami Heat – NBA scoring champ Dwyane Wade is good enough to extend this series to the max. But in the end, home-court advantage will be the difference. HAWKS IN 7.

(1) Cleveland Cavaliers vs. (4) Atlanta Hawks – Size will matter in this series. Can the undersized Hawks keep up with the bigger Cavs? The answer: too much Ilgauskas, Varejao and LeBron. CAVALIERS IN 6.

(2) Boston Celtics vs. (3) Orlando Magic – With or without KG, the Celtics are still better than the Magic. Boston won 62 games and most of it was done without Garnett. CELTICS IN 6.

(1) Cleveland Cavaliers vs. (2) Boston Celtics – When Boston was completely healthy last season and LeBron was basically by himself, it still took the Celts seven games to knock off the Cavs. This season, Cleveland clinches the series in Boston. CAVALIERS IN 6.