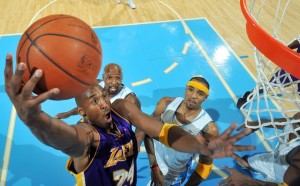 Kobe Bryant should have no problem leading the Los Angeles Lakers back to the NBA Finals.

Last June, the Los Angeles Lakers were humiliated by the Boston Celtics by 39 points in Game 6 of the NBA Finals at the new Boston Garden. That drubbing is still fresh in the minds of Kobe Bryant and Phil Jackson. Both future Hall of Famers are chomping at the bit to get back to the Finals and redeem their legacy.

No team in the Western Conference has the size nor the strength to push the Lakers. The Lakers run the most explosive and efficient offense in the NBA, and Kobe and Co. play enough defense to get stops late in games. Bryant is determined to win a championship without Shaquille O’Neal and Jackson is determined to move ahead of Red Auerbach in number of championships won by a coach.

Portland is the only team that can match up with the long and lengthy Lakers, but the Trail Blazers are probably a year away from seriously contending for a title.

Manu Ginobili is out with an injured ankle and the wear and tear of all those playoff games are finally getting to Tim Duncan. Despite the fact that Coach Gregg Popovich limited his minutes all season, Duncan’s knees were flaring up so bad that Popovich had to shut him down the last three weeks of the season. The Spurs are old and beaten up. Tony Parker is the only real starter under the age of 30. We could be watching the final stand of a great champion.

Denver, the No. 2 seeded team in the West, is a far better team with Chauncey Billups at the point than with Allen Iverson. But can Coach George Karl count on Carmelo Anthony in a big game? We shall see. Denver faces a formidable foe in New Orleans in the first round, and even though the Hornets have not been playing their best ball lately they still have the best point guard in the league in Chris Paul.

OneManFastbreak.net analyzes and predicts the winners of the Western Conference playoffs:

(1) L.A. Lakers vs. (8) Utah Jazz – This was the easiest series to predict. Jazz are not athletic enough to stay with Kobe and are not tall enough to deal with 7-footers Paul Gasol and Andrew Bynum. LAKERS IN 5.

(2) Denver Nuggets vs. (7) New Orleans Hornets – Before Billups arrived, the Nuggets were a borderline playoff team. With Mr. Big Shot, the Nuggets have a shot at the conference semifinals. NUGGETS IN 7.

(3) San Antonio Spurs vs. (6) Dallas Mavericks – If Devin Harris was still in Dallas, Mavs would be a cinch. But Harris is in New Jersey and Dallas is stuck with Jason Kidd. SPURS IN 6.

(4) Portland Trail Blazers vs. (5) Houston Rockets – In three head-to-head matchups, the home team won each time. It will be no different in the postseason. BLAZERS IN 7.

(2) Denver Nuggets vs. (3) San Antonio Spurs – Denver has never advanced past San Antonio in the Duncan era. Billups is poised to show the Nuggets how it’s done. NUGGETS IN 6.

(1) L.A. Lakers vs. (2) Denver Nuggets – After going through a tough series with Portland in the semifinals, the Lakers catch a break and are rewarded with a cakewalk in the conference finals against overmatched Denver. Too much Kobe, Gasol and Bynum. LAKERS IN 5.