When Rashard Lewis was asked where he stands in terms of scoring option on the Orlando Magic, he said he’s currently No. 4 trying to work his way up to No. 3.

Though it was a tongue-in-cheek response, Lewis was being honest when he said he was the fourth option on a Magic team loaded with capable scorers.

“We got some much talent on our team somebody has to sacrifice,” said Lewis, one of four All-Stars on Orlando’s starting lineup.

“Everybody has to play a role and you have to know your role. We have guys on the bench that can start on any team. Any given night anybody can go out there and score for us and win a game for us,” added Lewis, who scored a team-high 22 points on 8-of-13 shooting – including 4-for-7 from behind the arc – to lead the Magic to a 105-75 blowout victory in Game 3 in Atlanta.

Orlando is a perfect 7-0 in the 2010 playoffs and has a 29-point average margin of victory in its best-of-seven series against Atlanta.

“We’re a, most definitely, a better team than last year just because of the fact we’ve got a great bench,” Lewis said. “We have one of the best benches in the NBA. And our main goal is to win a championship, and I think we can. But it’s not gonna be easy. We gotta take it one game at a time, one round at a time, and we don’t want to jump ahead of ourselves.” 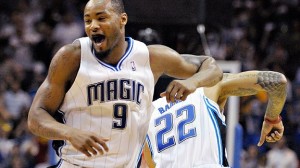 Rashard Lewis takes a backseat to Dwight Howard, Vince Carter and Jameer Nelson, but he may be the best shooter on the Orlando Magic.

“We pick and choose. If Jameer’s [Nelson] rolling, we’re gonna keep going to him. Obviously, Dwight Howard and Vince Carter are our 1 and 2 options and everybody else plays around that,” said Lewis, who has increased his scoring average from 14.1 in the regular season to 16.3 in the playoffs.

Since March 1, Orlando has been on an incredible roll, winning 26 of its last 29 games (including the playoffs) and is currently on a 13-game winning streak.

“We know it’s the playoffs, every possession counts, every game counts and we have to take it one game at a time,” Lewis said. “I think the coaching staff has done a pretty good job in keeping us focused.”

Lewis said coach Stan Van Gundy hasn’t allowed the Magic to let up despite the lopsided games because Van Gundy wants his team to stay sharp all the way to June.

“He wants us to win every quarter and play every possession like it’s our last,” Lewis said. “The window of opportunity to win a championship opens and closes. I feel like this is my chance and the window is open for me. Not only that, I’m making sure I’m ready to play every single night because I know my teammates are going to be ready to play and everybody knows their role and do their job. I want to make sure I’m doing my job and I don’t want to be the reason, so I gotta go out there and perform to a high level.”

One player who appears to be on a mission to help the Magic return to the NBA Finals is Nelson, who missed nearly all of last year’s playoffs because of a shoulder injury. Nelson returned to the lineup in The Finals, but was obviously not himself. Through the first seven games, Nelson is now healthy and playing with great purpose.

“With Jameer, he’s doing a really good job in running this team,” Lewis said of his point guard.

“When we focus in like that and we talk to each and don’t take it personal, we’re a better team. If somebody misses the help defense and we tell them about it then they’ll be there next time.”