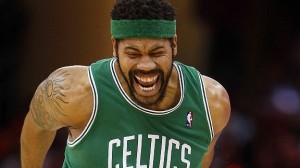 Rasheed Wallace last played for the Boston Celtics in the 2009-10 season. (GETTY IMAGES)

Rasheed Wallace is reportedly coming out of retirement to help the New York Knicks add depth to their bench.

Wallace has been trying to return to the NBA for the last year or so, and even had discussions with the Los Angeles Lakers and Miami Heat last season. The eccentric and fiery player known for drawing technical fouls from league officials seems to have finally found the right fit in New York. Wallace joining the Knicks is great news to Knick fans, but bad news for referees. Lets just say ‘Sheed won’t be receiving Christmas cards from league officials.

The move leaves a lot of people shaking their heads, as N.Y. has been busy signing veteran (use that term to soften it a bit) frontcourt players in Geritol-chugging Marcus Camby and Kurt Thomas. And they may not be done. It seems that they are quite interested to add Kenyon Martin for some reason. If that happens, Thomas will most assuredly be waving a towel on the bench.

While many may not like the Wallace signing, I think it is a decent acquisition. If they were being brought in to start, that’d be insane. But Wallace and Camby give N.Y. two solid backups who could play around 15-18 minutes per game. And they added some serious depth to a bench that was hit hard by injuries during the playoffs. If Amare Stoudemire or Tyson Chandler misses some games, Wallace, Camby and Thomas could provide much needed help.

The 38-year-old Wallace last played for the Boston Celtics in 2009-10 when he averaged 9 points per game and 4 rebounds per game in 22 minutes. For his career, he is a 34% shooter on 3-point attempts. That’s not exactly great for a guard or small forward, but for a power forward/center, it’s pretty impressive. By comparison, Kobe makes 33.7% of his 3-point attempts.

The Knicks could play ‘Sheed at center or forward, and sit him behind the 3-point arc and draw his defender away from the basket. This opens up driving lanes for Carmelo Anthony and others. Wallace adds a dimension to the Knicks offense, especially if he and Steve Novak are on the floor together.

Wallace was best known for his time spent in Portland in the mid 1990s to early 200os when the Trail Blazers battled the Lakers in the Western Conference playoffs. He won a championship ring in 2004 as a member of the Detroit Pistons.

Darren Jacks is a contributor to OneManFastBreak.net. Send him an email at: djroxalot@hotmail.com.