It was a Thursday afternoon in El Segundo, Calif. The Southern California weather was very accommodating and the players practicing at the Toyota Center had a certain bounce to their step.

The Los Angeles Lakers opened training camp this week and based on the sounds and images during a practice session, everything suggests that the defending NBA champions are primed and ready for another run a title – the 15th in the storied franchise’s history.

“The way this team is built, they are going to challenge the Bulls’ ’96 record of 72 wins in a season,” TNT analyst Reggie Miller said during “Real Training Camp” on NBA TV.

Miller’s sentiments are shared by many basketball experts who all feel that the Lakers have the best team in the world and have the talent and depth not only to repeat but to challenge the benchmark of 72-10 set by the 1996 Chicago Bulls. Those Bulls boasted a star-studded roster that included the best player in the game, the most versatile player, a European stud, a defensive dynamo with a flare for the dramatics and head coach Phil Jackson. 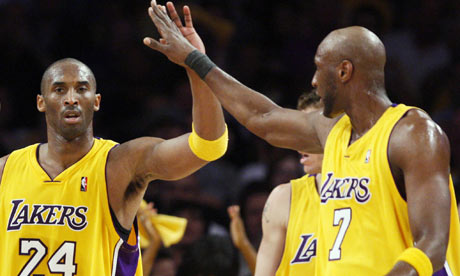 Kobe Bryant and Lamar Odom are the HD version of Jordan and Pippen.

It is almost freakishly too good to be true. Kobe Bryant can play the role of Michael Jordan, Lamar Odom as Scottie Pippen, Pau Gasol as Toni Kukoc, Ron Artest as Dennis Rodman and Phil Jackson as … Phil Jackson. In supporting roles, Derek Fisher can be B.J. Armstrong, Sasha Vujacic can play Steve Kerr, Shannon Brown can simulate Randy Brown, Luke Walton is Jud Buechler and Andrew Bynum can easily be the next Dickey Simpkins.

The schedule also suggests that the Lakers should get off to a phenomenal start as 17 of their first 21 games are at Staples Center. “The way their season is built, their first 21 games, four of those are on the road,” Miller explained. “Oklahoma City…young team, a win. Houston…no Yao Ming, Tracy McGrady we don’t know, a win. Denver…OK, Denver plays great at the Pepsi Center so let’s say that’s a loss. And then they have Golden State, a young team in disarray. The Lakers can go 20-1 in their first 21 games.”

Miller added: “So yes, I think they’re going to challenge the Bulls’ 72-win season. But are they gonna win it all? If everyone is healthy, I kinda like the Boston Celtics. But it’s gonna be a fabulous matchup between the Lakers and Boston.”

Before we put Miller in a straight jacket for his bold prediction, it may not be that far-fetched considering that the Lakers won 65 games last season, has the reigning NBA Finals MVP in Kobe, the reigning European MVP in Gasol and arguably the greatest coach in the sport in Jackson.

Miller reasoned that the acquisition of Artest upgraded the small forward position and the former defensive player of the year should add toughness on defense and flexibility on offense.

“The West has gotten better, but so have the Lakers,” Miller said. “The rich get richer.”