Like a boxer who just got knocked down twice in the last two rounds, the Boston Celtics return home for Game 6 with a couple of bad headaches, an aching back and a little bit of doubt in their ability to knock out the suddenly surging Orlando Magic in the 2010 Eastern Conference finals.

When asked if the Celtics could fall into the same fate as this year’s Boston Bruins – who lost four consecutive games to the Philadelphia Flyers after winning the first three in their Stanley Cup playoff matchup – Celtics forward and vocal leader Kevin Garnet emphatically said, “This is not hockey.”

Boston still leads its best-of-seven series with Orlando, 3-2, but its position has been compromised a bit with the way the Magic have won the last two games. And, with the mounting injuries and possible suspension of starting center Kendrick Perkins after he received his sixth and seventh technical fouls of the playoffs, the Celtics went from a possible sweep to a must-win situation in three days. 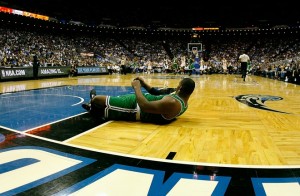 Celtics forward Glen Davis lies on the court disoriented after taking an elbow to the head from Magic center Dwight Howard in the third quarter of Game 5. (NBAE/GETTY IMAGES)

The Celtics took one on the head literally in Game 5 when two players, Glen Davis and Marquis Daniels, suffered concussions and both had to be helped off the court.

Davis caught an inadvertent Dwight Howard elbow to the face late in the third quarter that knocked him down to the floor. When he tried to get back up, he staggered into the arms of referee Joey Crawford before teammate Rasheed Wallace came over to help keep him up. Davis walked off the court under his own power but never returned.

Just minutes after Davis’ injury, Daniels slammed his head into the chest of Magic backup center Marcin Gortat and went down to the floor. The Celtics were forced to foul just to get Daniels off the court, and Rivers said later that the backup guard also blacked out for a moment. Then, with the game well in hand, Wallace tweaked his lower back on a layup and he also had to leave the game and went to the locker room to get treatment.

“I know [Baby] blacked out on the floor. I was just trying to get him back down on offense. And Marquis was the same thing. A lot of elbows,” said Celtics coach Doc Rivers, whose team lost 113-92 in Game 5 in Orlando. Boston’s lead is down to 3-2 in the series and Game 6 now becomes a critical game for the Celtics because they want to avoid playing a Game 7 in Orlando.

Rivers is not sure about “Big Baby” Davis’ availability for Game 6, and joked that Davis may not pass the battery of tests anyway because of his wacky personality. “I don’t know what kind of tests they’re gonna do with Baby because he’s a little delirious half the time anyway so I don’t know how he’s going to pass the test. I’m worried about that,” Rivers said while cracking smiling. “But I guess he’ll have to do something before they clear him.”

Game 5 took a physical toll on the Celtics and it appears that the Magic, particularly Howard, are now the ones dishing out the punishment. “The team that’s been the most physical has won the games,” Rivers said. “It was us for the first three and I think it’s been Orlando the last two.”

As for Howard’s physicality and his loose elbows, Rivers said while shrugging his shoulders, “I didn’t know it was legal. Listen, he’s a physical guy. We know that, and you know what he should be. That’s his gift. So he’s going what he’s should do and we just need to do a better job to take the hits, I guess.”

Howard disputed any dirty tactics on his part or his team, and explained that being physical is the best way to combat the Celtics.

“Our intent is not to hurt anybody out there,” Howard told reporters. “Basketball is a very physical sport. You’re playing against a very physical and tough team in the Boston Celtics so our biggest thing is not try to fight and wrestle with them. Like I tell [my teammates], it’s all mental. We don’t want to get into a pushing match with those guys. We just want to run and play our game.”

Howard added that he certainly did not intend to hurt Davis and he was just as concerned as everyone else.

“At first, when I got back, I was looking for him because that was my man. Then when I saw him down I was like, ‘Oh, man.’ I didn’t know what to do,” Howard recalled. “I wanted to help him, but he’s on the other team. So I just stayed back and just wait. I just hope he’s OK. He’s one of my friends. You don’t want to see anybody, specially your friend, go down like that.”