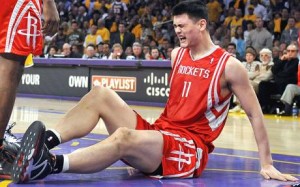 According to TNT's David Aldridge, Rockets center Yao Ming is expected to play this season. (EPA)

Yao Ming was recently quoted of saying he will seriously consider retirement if he doesn’t recover from his latest foot injury.

“If the foot injury does not heal next season, I might choose to call it quits,” Yao reportedly said.

Yao, who turns 30 in December, was the No. 1 overall pick in the NBA back in 2002 by the Houston Rockets and although it took him a while to become a force in the league, he is now considered one of the top five centers in the world.

TNT’s David Aldridge doesn’t believe the six-time NBA All-Star is ready to retire, citing that Yao’s latest comments were somewhat taken out of context. “He was responding to a hypothetical question,” Aldridge recently said on NBATV’s “Game Time.”

“Everything that I’ve told from Houston is that rehab is on schedule, he’s gonna play next season, they are not going to push him at the start of training camp, even though he could probably be cleared for training camp, they want to make sure he’s healthy in March not September or October,” Aldridge reported. “They’re going to take it very easy with Yao for the first month or two of the season, he’s going to be on a minutes limit, but [the Rockets] feel like he’s going to be ready to play next season.”

Aldridge noted there have been no setbacks and, so far, there is no issue with his foot.

“It’s coming along. It’s better than what it was,” Aldridge said. “He’s doing the rehab work, he hasn’t missed the rehab work and he’s on schedule to play next year.”