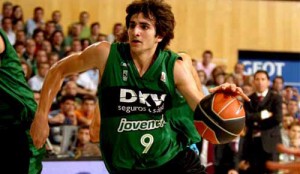 The New York Knicks are pursuing a trade for European sensation Ricky Rubio, who was taken at No. 5 by the Minnesota Timberwolves. (ASSOCIATED PRESS)

Make no mistake about, the Minnesota Timberwolves got the best player in the NBA Draft. Though Blake Griffin was the clear choice as the No. 1 player in the draft, Ricky Rubio – Minnesota’s pick at No. 5 – could potentially be the guy who will define the ’09 draft.

Rubio, the much-hyped European sensation from DKV Joventut, is the great unknown. At 18 years old, he was the youngest player in the draft but also its most seasoned, having played professionally in Europe since he was 14. To borrow a line from draft guru Mel Kiper Jr., Rubio has a “high ceiling” and has more room to grow than Griffin and Hasheem Thabeet. Right now, the wunderkind from Badalona plays more on instinct and needs to clean up some his bad habits. But behind the raw potential is a budding superstar.

Donnie Walsh, general manager of the New York Knicks, recently confirmed the Knicks are in hot pursuit of the Spanish point guard and planned to contact Timberwolves GM David Kahn about Rubio’s availability. Kahn explained that the reason he took two point guards with the fifth and sixth overall selections was because he anticipated that Rubio might return to Spain for one or two more years. Whether that happens or not, Kahn has a backup plan in Syracuse point guard Jonny Flynn.

New York would be the ideal place for Rubio. It would be comparable to Patrick Ewing’s arrival in the Big Apple 24 years ago. With his rock star looks, battle-tested game and freakish resemblance to “Pistol” Pete Maravich, Rubio would be worth the enormous price of admission at Madison Square Garden, which is begging for a lead MC for its starving fanbase. If the Knicks get Rubio, he instantly becomes the frontman of the franchise and the trigger man for Coach Mike D’Antoni’s wide open, rapid-fire offense.

Rubio has previously mentioned that it would be his “dream” to play at MSG.

D’Antoni has a soft spot for European players (see Danilo Gallinari in last year’s draft), having played and coached in Europe for the better part of his professional basketball life. He starred for Olimpia Milano from 1978 to 1990 and had two stints as coach of Italian League powerhouse Benetton Treviso.

D’Antoni understands that he can’t curtail Rubio’s game, much like the way he handled Steve Nash in Phoenix. He would love to pair Rubio with fan favorite Nate Robinson in the backcourt. At 6-foot-4, Rubio has the size to contend with shooting guards, allowing the 5-8 Robinson to cover the point. Robinson is more of a scoring guard, so having Rubio at the point affords him the freedom to play off the ball.

While Rubio was the sexy pick in last Thursday’s draft, Griffin – the power forward from Oklahoma – was the safe pick. He is the most polished player and the most NBA-ready among his peers. The bad news is, he’s going to the L.A. Clippers. As soon as he puts on that Clipper uniform, he’ll find himself on the injury list faster than you can say … Danny Manning.

The Orlando Magic were put in the same predicament in the 2004 draft. They had to choose between the more polished and NBA-ready Emeka Okafor or the young, untapped potential in Dwight Howard. The Magic rolled with Howard and the rest is history.

Rubio’s length and long arms are two huge pluses for a point guard. He can also play defense – something most foreign-born NBA players have trouble understanding. And even though Rubio has a little bit of Pistol Pete in him, his game is very much an original and he brings a different swag to the table.

ESPN’s Fran Fraschilla said Rubio “has an incredible off the charts basketball IQ.”

“He is one of the best passers I’ve ever seen,” Fraschilla said of Rubio, who was born to run the pick and roll, and will greatly benefit from having skilled big men like Kevin Love and Al Jefferson.

“You can put him in the same category (as a passer) with, and this is sacrilegious, with Pistol Pete, Magic, Larry Bird, Steve Nash and on and on,” Fraschilla continued. “He has a Gretzky-like feel. He sees the game two or three plays ahead. He would have been a major star in college ball without a doubt.”

Aside from his Euroleague experience, Rubio also gained valuable court time during the 2008 Beijing Olympics as a member of the Spanish national team that lost to the United States in the gold-medal game. How many teenage point guards can say they went head-to-head against Chris Paul, Deron Williams and Jason Kidd and lived to tell about it? Check that. How many point guards among the general population have held their ground against CP3, D-Will and J-Kidd in a championship game? The very short list has Rubio’s name on it.

Jonathan Givony of Draft Express wrote this about Rubio:

His 51 point, 24 rebound, 12 assist and seven steal game in the Under-16 European Championship game is already a thing of legend. His debut in the strongest league in Europe came at age 14. He won the FIBA EuroCup in 2006, and the ULEB Cup in 2008. He was a key cog in helping a Rudy Fernandez-led squad win the prestigious Copa del Rey last year, and was named the top point guard in the ACB a few months later…

Rubio is rewriting the record books every time he steps on the court. He’s in unchartered territory, and no one really knows how far he can go. His knowledge of the game and feel for making plays is really unlike anything we’ve observed before –sees things on the floor and executes passes that only a handful of players in the world are capable of even thinking of. The poise and maturity he shows at all times is nothing short of incredible.

Clearly he has weaknesses — the most turnover player in the ACB, and shoots an ugly flat-footed jumper that doesn’t inspire much confidence regarding his ability to transition out to the NBA 3-point line. Somehow he manages to shoot 43 percent from beyond the arc, though, and also leads all players in this draft in assists per-minute, and not by a small margin. He was also named the defensive player of the year in Spain, after leading the league in steals for the third-straight season. How much can we expect him to improve over the next few years? That’s the million dollar question.

The Knicks are still hoping to lure LeBron James in 2010, but that is more of a pipe dream than anything else. James is more likely to sign with the Yankees than the Knicks as long as Cleveland is within reach of an NBA title. James badly wants to win a championship for his hometown team and he will keep trying until he succeeds. That leaves Walsh and D’Antoni with their backup plan, and Plan B is to bring Rubio to New York.