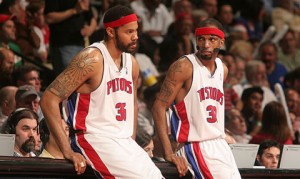 Rasheed Wallace and Rip Hamilton, holdovers from Detroit's 2004 championship team, will be sitting out the rest of the NBA playoffs after getting swept by Cleveland in the first round.

Rip Hamilton would always say that, “If it ain’t rough, it ain’t right.” Well, it has been a really rough last 12 months in the state of Michigan. First, The Big Three (Ford, Chrysler and General Motors) sputtered with the rest of the economy. Second, the University of Michigan suffered its worst season in more than 120 years. And third, the Detroit Lions became the first NFL franchise to go 0-16.

Now, add the Detroit Pistons to the state’s list of casualties.

After six consecutive trips to the Eastern Conference finals, the Pistons and their play-the-right-way approach finally broke down like a 1980 Oldsmobile. The wheels started coming off in the first two games against top-seeded Cleveland and then the engine blew out in the last two games. It did not come as a big surprise that the Pistons were eliminated by the Cavaliers in the first round. What was a little disturbing was how the once proud Pistons bowed out, getting swept in four ho-hum games and LeBron James and Co. barely breaking a sweat in doing so.

Here are some of the stat lines in Game 4 from the core of the Pistons’ 2004 NBA championship team: Rip Hamilton, 2 for 12 in 37 minutes; Rasheed Wallace 0 for 7 in 29 minutes; Tayshaun Prince, 1 for 5 in 31 minutes. All three combined for eight points in an embarrassing 99-78 loss at home.

GM Joe Dumars will have a busy offseason retooling this squad, and there are a ton of questions he needs to address. Will he bring back Michael Curry as coach? Will Sheed walk out as an unrestricted free agent? Is Rodney Stuckey now the face of the franchise? Is Prince on the trading block? There is no need to address the Allen Iverson situation because A.I. has left the station a long time ago, sending a clear message to Dumars and the Pistons that he does not want to come off the bench and be a token player. Don’t let the “back injury” fool you. The Answer was not down with the whole sixth-man thing.

But the Pistons began losing its way long before the Iverson issue. The demise of the franchise could be traced to the Chauncey Billups trade to Denver, a move that still baffles a lot of Detroit fans. There are some guys you just don’t get rid of. Sure, Billups was probably on the downside of his career but Mr. Big Shot was the unquestioned leader of that locker room and moving him out was a huge gamble on Dumars’ part.

Basically, you could say that getting rid of center Ben Wallace knocked the Pistons down, and getting rid of Billups was the final blow that put them to rest.